The Black Box Theatre in downtown Moline presents the dramedy “I and You” by Laura Gunderson through Saturday. The plot: One afternoon, Anthony (Michael Alexander) arrives unexpectedly at classmate Caroline’s (Adrienne Jane) door bearing a beat-up copy of Walt Whitman’s Leaves of Grass, an urgent assignment from their English teacher. Homebound due to illness, Caroline hasn’t been to school in months, but 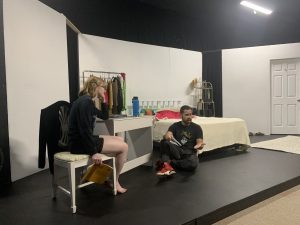 she is as quick and sardonic as Anthony is athletic, sensitive, and popular. As these two let down their guards and share their secrets, this seemingly mundane poetry project unlocks a much deeper mystery that has brought them together. I and You is an ode to youth, life, love, and the strange beauty of human connectedness.

Starring in the area premiere are Michael Alexander who had previously been in the Black Box production of “War of the World” and Adrienne Jane, who recently finished a run of “Princeton’s Rage” at Playcrafters Barn Theatre.  Directing is Kayla Jo Pulliam who has starred in two Black Box productions (Turn of the Screw and Love, Loss and What I Wore.) Set design by Lora Adams, construction by Michael Kopriva, costuming by Jacqueline Isaacson and lighting design by David Miller.

“We produced Laura Gunderson’s play “Silent Sky” several seasons ago and we are delighted to, once again, premiere one of her plays here at the Black Box,” said Adams, The Black Box Theatre’s co-founder.

“I and You” performances are Thursday, Friday and Saturday at 7:30 pm and Sunday at 2:00 pm. Tickets are $13 on Thursdays and $16 all other performances. Tickets are available online at theblackboxtheatre.com.

Sean Leary
Sean Leary is an author, director, artist, musician, producer and entrepreneur who has been writing professionally since debuting at age 11 in the pages of the Comics Buyers Guide. An honors graduate of the University of Southern California masters program, he has written over 50 books including the best-sellers The Arimathean, Every Number is Lucky to Someone and We Are All Characters.
See More Articles From Sean Leary
Tagged: Black Box Theatrei and youlaura gundersonLora AdamsQuadCities theater