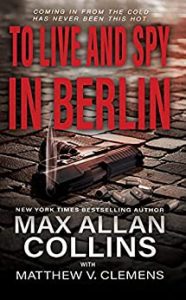 The world thinks John Sand’s retired. No longer heading into the MI6 offices, he’s an energy company executive. He’s got a nice corner office, lavish dinners to attend, and no bullets flying at his head…yet.
The truth is much deadlier.
Sand’s hunting stolen uranium, and he knows if he doesn’t find it soon, he’ll be hunting something very different…a nuclear bomb.
Deep in South America, the remnants of Nazi Germany hide. Their only goal is to accomplish what their insane leader failed to do: ensure Germany rises victorious out of the next World War.
Now that they’ve got enriched uranium, their psychopathic dreams are merely days away.
In a race against time, Sand must find the uranium and destroy these deranged lunatics once and for all.
Can the world’s greatest spy stop the evilest men to ever live?
Or is he a bit too old, a bit too weak, and a bit too slow?
Want to order it, or get more details? Click here!
Advertisement

Sean Leary
Sean Leary is an author, director, artist, musician, producer and entrepreneur who has been writing professionally since debuting at age 11 in the pages of the Comics Buyers Guide. An honors graduate of the University of Southern California masters program, he has written over 50 books including the best-sellers The Arimathean, Every Number is Lucky to Someone and We Are All Characters.
See More Articles From Sean Leary
Tagged: crime storiesMatthew Clemensmatthew v. clemensMax Allan CollinsMax Collinsquadcities authorsquadcities booksthrillersto live and spy in berlin