Home » Posts Tagged "behind the mask" 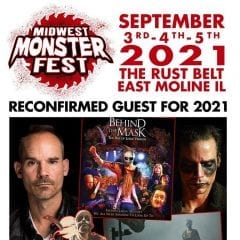 Nathan Baesel is coming to Midwest Monster Fest 2021 on Sept. 3-5! Baesel graduated from the Juilliard School of Drama. He has appeared in various national television spots and guest starred in The District and CBS’s Cold Case. He had a recurring role on ABC’s science fiction drama Shaun Cassidy’s Invasion, playing the one-armed deputy Lewis Sirk. As well as various roles in shows such as, C.S.I, C.S.I.:Miami, Without a Trace, Journeyman and more. Nathan is a founding member of NY-based Theater Mitu and he performs regularly for South Coast Repertory. One of his best known... Read More