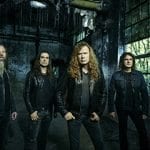 American thrash metal band, Megadeth, slams into the iWireless Center on October 7 at 6:00 p.m.  The band has sold 50 million records worldwide, earned platinum certification in the United States for five of its fifteen studio albums and has received eleven Grammys. Special guests Amon Amarth, Suicidal Tendencies, Metal Church and Butcher Babies will be on board, so reserve your tickets today by calling 764-2001. It’s all about the DANCE!  Academy for the Performing Arts is in the process of accepting new students, from tots to teens.  Dance classes include ballet, jazz and tap.  The... Read More