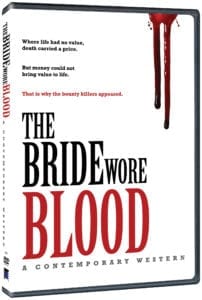 In 2006, on the heels of Bettendorf duo of Bryan Woods, 22, and Scott Beck, 22, grabbing first prize in the MTV-U Best Film on Campus contest, the duo sold one of their prizes, a big screen TV, to fund their next film, a contemporary western called “The Bride Wore Blood.”

The film was shot locally and featured a Quad-Cities cast, including star Jim Siokos, and crew, including a soundtrack by Scott Morschhauser of the Kabalas and Metrolites, and debuted on DVD and on the big screen at the Putnam IMAX.
At the time, I interviewed Scott Beck about the project. Here’s the result:

Q: What led you to do a contemporary Western?

A: I think it all starts from the idea that we want to try new things and not lock ourselves into one certain tone or genre. … Both Bryan and I had an interest in doing a Western, and part of that stemmed from meeting Scott Morschhauser. He’s an avid fan of spaghetti Westerns and loves the music of Ennio Morricone, and that really rubbed off on us.

So in a strange way, it almost feels like we the made the movie so he could score it.

Q: What artists influenced you in embarking upon this project, and during it?

A: Sergio Leone’s films were a great inspiration, just because of their boldness and great characters and landscapes. His scenes are just extremely powerful through visuals, and so as directors, Bryan and I sort of approached this film as an exercise in directing like that.

However, Leone is the obvious influence, as his Westerns are some of the most popular of the genre.

There are so many other artists who we have learned from, and every little bit has helped us in storytelling. The story and the characters are revealed in a nonchronological way, so the audience discovers more at the same time as the characters, so I guess even films like Billy Wilder’s “Witness for the Prosecution” and Chris Nolan’s “Memento” have left their mark with us.

Q: What was the origin of this script in particular, and how did it evolve?

A: The film all stemmed from us waiting for our development deal with MTV to go through negotiations. Things had taken some time, and we decided to just go ahead and make another film.

We had been writing screenplays for the last year and a half, but hadn’t directed anything in a while, so we said, “Let’s do this, let’s make another movie.”

Well, the script was originally about five to 10 pages, and it was going to take us a couple days to shoot it. But eventually, after revisions and everything, it turned into 30 pages. Then when we got to shooting, it took about 16 days, and the final cut of the film runs about an hour.

Q: Do you feel this film is an evolution for your style, and do you see it informing future work?

A: I don’t think Bryan and I could even see a “style” in our work, if it’s even present. I guess if there is a style, it probably revolves around the fact that we care about our characters, our visuals, and we try to bring something interesting to the table.

I mean, our last two films were all about characters. “Her Summer” is kind of a ghost story, suspense film, but it’s really about its characters. “University Heights” is the same way, only in more obvious ways.

So I guess we like showing people with three dimensions, and in “The Bride,” it’s all based around moral judgments and people who shield their past.

Q: What gave you the idea to sell the TV to raise funds?

A: There was no question about whether or not I was going to keep the TV. It was sold before I even won it!
Honestly though, we entered the MTV-U Best Film on Campus contest to win that development deal and sell the TV so we could fund movies. There’s been some other contests that we have entered where the prizes have been cars or something expensive like that, but we’ve only entered those contests to sell the prize and use the money for films.

So when I got the HDTV delivered, I immediately put it on eBay and sold it to the highest bidder. And luckily, we got some good money for it, so it was able to fund “The Bride,” which turned out to be our most expensive film to date.

It’s like this: If either Bryan or I won the lottery, we’d spend millions on making a movie here in the Quad-Cities, no question about it.

Q: How did the collaboration with The Metrolites come about?

A: Scott Morschhauser contacted us in early 2005 about doing soundtrack work, so we met and just discussed our interests and what we were doing and what we wanted to do.

Of course, we listened to The Metrolites “In Spy-Fi” CD and loved that, and Bryan and I were really interested in working with Scott. Over time, we just kept in touch and he worked on themes, and eventually, when Bryan and I decided to make “The Bride,” we approached Scott about doing the score and he was definitely in.

Q: What is the status of the MTV deal?

A: Paramount and MTV Films were recently restructured, so that has slowed things down a bit. Regardless, things are still on track, and they’re definitely good. We’re still in the negotiation phase, so it may still take a couple months, but things should be happening soon.

Q: If the MTV deal comes through, what do you want to work on, and what’s your timeline?

A: We have several projects we’d like to do for them, and those projects, of course, will fit into MTV Films’ material, but at the same time, Bryan and I will want to keep things fresh and unique. The timeline is dependent on the contract negotiations.

Q: What projects will you be working on next?

A: We have a ton of projects that we want to do, and they vary from horror films to comedies. I think it’d be fun to work on a comedy, since we haven’t really ventured into that direction yet.

There are so many different stories that excite us, so after “The Bride,” we’re going to have to sit down and figure out where to go from there.

Q: In the past, you’ve said you’ve been influenced by filmmakers like M. Night Shyamalan and Alexander Payne. What directors do you feel have had the biggest influence on you?

A: It sounds obvious, but any good director is an influence and, more importantly, a teacher. Payne, Cameron Crowe, Wilder, Hitchcock, Buster Keaton, Woody Allen, Zemeckis — they’re all equally important, even though they span genres and time periods. …

One director I incredibly admire is the French filmmaker Jacques Tati. He only made a handful of films in his life, but they’re among the best films I have ever seen. They’re so full of life and comedy.

One of Tati’s last films and biggest failures (at the time), “Playtime,” is one of my favorite films of all time. In fact, the script was over 400 pages long, and he had memorized every single page — that’s how much he loved and cared about his film. That’s something that really inspires me to do better as a filmmaker.

Q: You’ve talked about staying based in the Midwest regardless of how things pan out with the MTV deal. Is that still the plan?

A: It’s definitely the plan. The Midwest and the Quad-Cities is just a great place to make movies. Since movies are a rare commodity around here, film production is exciting, so you get a lot more people interested in helping.

We’ve said this a lot, and we mean it — there’s tons of talent around the region. Bringing a large-scale production to the area is still a goal for Bryan and me.

There are tax incentives in the works for film productions in Iowa, and we’re really hoping the bill gets passed, as it would be a huge boost for the many filmmakers throughout the state.

Q: How did the documentary on the Avatis come about?

A: Bryan and I were on the set several days while the Avatis were shooting in the Quad-Cities. We shot footage both for ourselves and for the Italian RAI television channel, which will be producing their own behind-the-scenes documentary. Their documentary will probably accompany the release of the film next year.

As far as our documentary, we’re kind of on hold, as we want to wait until the release of “The Hideout” (the Avatis’ latest film, which was shot in the Quad-Cities earlier this year) and see how it does and if there will be any more to our documentary’s “story.”

Q: How do you feel about what you’ve accomplished so far?

A: I always feel like there is more that I could be doing to further myself. I’m grateful for all of the opportunities and things that have come our way, but there’s always this feeling that I should have accomplished more by now.

There’s a long road ahead, and the film industry is a tough one, so it takes a lot of hard work and persistence. Bryan and I have always known this, and we’re ready to tackle it, so we’re always more focused on the future than the past.

Sean Leary
Sean Leary is an author, director, artist, musician, producer and entrepreneur who has been writing professionally since debuting at age 11 in the pages of the Comics Buyers Guide. An honors graduate of the University of Southern California masters program, he has written over 50 books including the best-sellers The Arimathean, Every Number is Lucky to Someone and We Are All Characters.
See More Articles From Sean Leary
Tagged: Bluebox FilmsBride Wore BloodBryan WoodsJim SiokosKabalasMetrolitesScott BeckScott Morshhauser