You’ll Be Sweet On Radicle’s Strawberries And Cream Beer

You ever wonder what happened to Strawberry Shortcake?

You know, Strawberry Shortcake, the cartoon ginger who has had her artificially-scented life documented by various cartoons/animated reality TV shows over the past couple of decades before they got sent to the reeking dumpster of cancellation?

Her friends were Lemon Meringue, Blueberry Muffin, Orange Blossom and Raspberry Torte, and they all had their own sickly sweet and sour personalities, but Strawberry Shortcake was the leader. 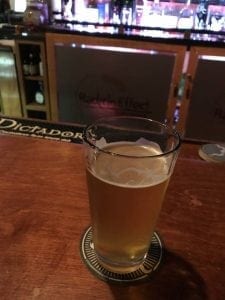 Strawberry Shortcake debuted in 1980 as a child in the cartoons, so she’d be in her forties now. And like many of us who have crossed into our adulthood and logged some scars, booked some bad relationships and bled our wallets for attorney’s fees, maybe things haven’t gone so well for her. Maybe she’s had a divorce or two and her husband, Peanut Butter Cookie, got caught cheating with that trollop Raspberry Torte, and she found a bunch of texts alluding to some kinky “PB and J” thing, and well, her last lover British Crumbcake was really boring and stuffy and had a lot of bedroom hangups and Strawberry just wants to escape every once in a while into a bottle of wine or another tasty beverage of transcendent inebriation to prevent her from going all Thelma and Louise on that cheating bastard Peanut Butter Cookie and his hooer Raspberry Torte.

Well, Strawberry, do I have the booze for you.

It’s called the Strawberries and Cream Ale, and it’s in its second brewing at Radicle Effect, 1340 31st St., Rock Island, and if you don’t go try it out, you might wake up at some point in the next month or so with a gnawing feeling of loss that you can’t quite put your finger on, but it’ll be there, it’ll be real, and it’ll be profoundly haunting.

Trust me on this.

Damn, I’m kinda surprised. I don’t know if I’d even trust me. But hey, roll the dice!

The Strawberries and Cream, like adult Strawberry Shortcake, is still charming and intoxicating and has a certain sweet but not-too-sweet personality with a touch of sourness that lends it character and mystery. It’s very drinkable, which isn’t an obvious statement to say that it’s liquid and literally it’s able to be transmitted down your esophagus, although it’s amazingly adept at that, but it is to say that it’s light and missing the hoppy or heavy nature that would make it less of a chugging and more of a sipping beer. This stuff goes down like soda, my friends. Like strawberry soda.

And perhaps, maybe on some enchanted evening, she’ll make her way to Radicle, and, well, I’ve always had a thing for gingers. 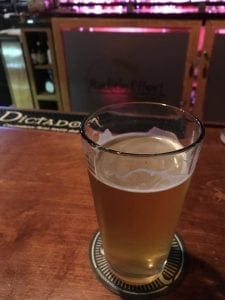 Anyway, meanwhile, back in reality, the Strawberries and Cream is an inspired and delicious brew. I can always count on Radicle to come up with some really funky and fun combinations in their brew pub and I love the strange and wonderful flavors they concoct. When bartender extraordinaire Jon Horvath told me about it, I couldn’t resist it. And I was glad I didn’t. It’s fantastic. Really, you don’t get to try offbeat stuff like this very often, and while it seems like a really strange blend, it’s incredible. Absolutely brilliant.

So, whether you’re Strawberry Shortcake, Lemon Meringue, any of the other characters (excluding Raspberry Torte, that scandalous hussy) or an actual non-cartoon-based human being, make your way down to Radicle for a Strawberries and Cream.

As always, you can thank me later.

And by thank me, I mean buy me a drink if you see me at the pub.

Until next time… cheers!