If you close your eyes during the terrific, open-hearted, snarky musical “Holiday Inn,” now at Music Guild in Moline, there is virtually no way to tell that the incredibly talented, dedicated volunteer performers are singing with cloth masks on. (Precise diction helps and those must be powerful body mics, thank God.)

As we approach our third year of the interminable Covid pandemic, the Prospect Park theater is continuing to abide by the strict Illinois regulations that require everyone above age 2 to wear face masks while in indoor public places. 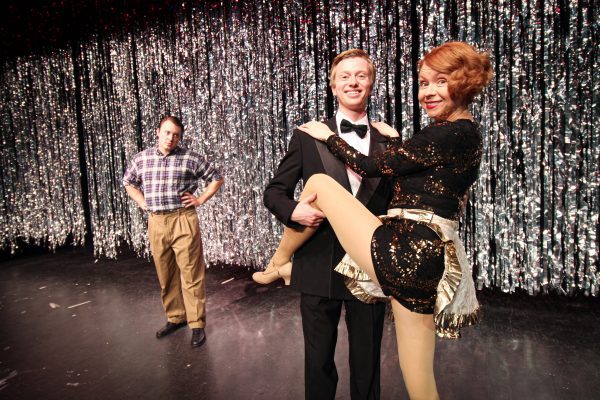 That makes theater-going more safe and secure for everyone, and allows the Guild to inspiringly prove that the show can and must go on.

But don’t close your eyes too often during the tremendously entertaining show – packed with Irving Berlin chestnuts and lesser-known numbers that are just as delightful – because it’s a real feast for the eyes as well as the ears. The old-fashioned musical, with an often contemporary feel, is based on the classic 1942 film that gave the world “White Christmas”, and runs just one weekend, through Sunday at 1584 34th Ave., Moline.

It is incredibly helmed by a first-time director, Luke Vermeire, who you can tell is passionate about theater and leads the action with clarity, emotion and humor, in tandem with wonderful, dazzling choreography by Shana Kulhavy.

In “Holiday Inn,” when singer-songwriter Jim Hardy tires of showbiz, he shocks his best friend Ted and fiancee Lila by leaving the bright lights of Broadway behind, for a calm, simple life in a Connecticut farmhouse. At first, he greets his new life with enthusiasm, but, just as he starts to think farm life isn’t all it’s cracked up to be, he meets Linda Mason, a spunky schoolteacher harboring immense talent and big dreams. 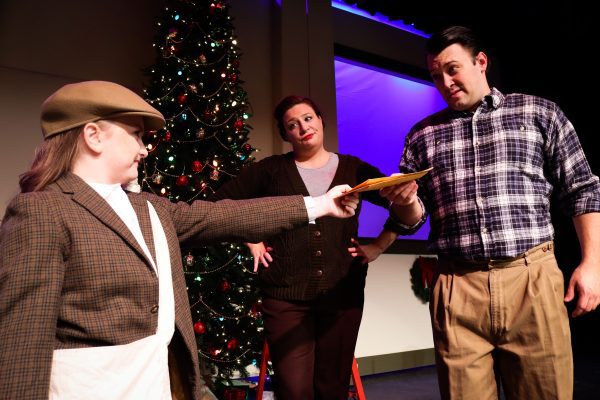 Together, they bring life back to the Mason farm by transforming it into the Holiday Inn, a lively venue for festive performances celebrating most red-letter days on the calendar. However, when Ted shows up ready to spirit Linda away to Hollywood, will Jim lose his best shot at happiness?

It’s got dance numbers galore and a score packed with beloved Berlin hits like “Blue Skies,” “Cheek to Cheek,” “Steppin’ Out With My Baby,” “Easter Parade,” “Heat Wave,” “Shaking the Blues Away” and of course “White Christmas,” together with an immensely tall tree spectacularly bedecked with lights and ornaments.

“Holiday Inn” was performed at Circa ’21, Rock Island, in summer 2019, and the new version features Tyler Henning as Jim, Lauren VanSpeybroeck as Linda, Daniel Williams as Ted, Susie Carsell-Schaechter as Lila, Mark Kulhavy as Danny, Peyton Beck as Charlie, and Jess Fah as Louise. They’re all strong and perfect in their parts.

The visual splendor is led by set designer Andy Sederquist and costume designer Joe Thomas, and my gosh, did they do their jobs with amazing professionalism and panache. I was especially impressed with the interior of the farmhouse in the fictional town of Midville, which is spacious and elegant, with two large windows and three sophisticated light fixtures. That set inventively doubles at the show close, with two walls angled for the Hollywood film set.

The women dance ensemble performs a Fourth of July number in “Holiday Inn.”

The country life (including a beautiful, rustic painted backdrop) is contrasted sharply with the showbiz city life, in many sparkly nightclub scenes.

There are countless costume changes in “Holiday Inn,” and the outfits are so colorful and spot-on, to evoke each of the holidays in which the scene is set. The six-member all-female dance ensemble is responsible for many of the costume changes. 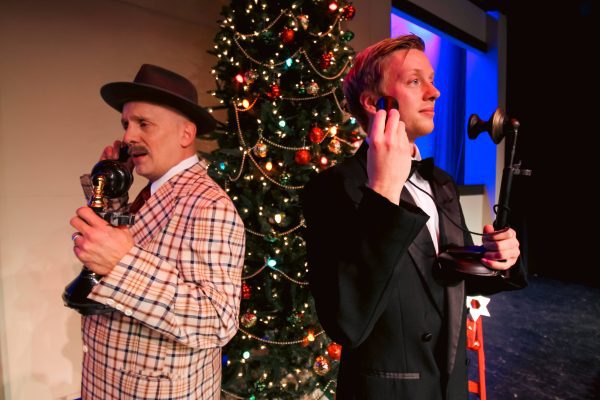 The excellent Megan Winchelle, Stephanie Truitt, Emily Brooks, Faith Hardacre-Meuser, Leslie Aboud, Izzy Bartscher, Lillian Fincher, and Juliet Hunt are super cute and exuberant in everything from pilgrims at Thanksgiving to outlandishly-hatted women at Easter and crisp sailor-like dancers (in white and navy blue) on the Fourth of July.

There are many extraordinary dance numbers capably, stylishly handled by the cast, and both the ensemble and couple dancers are equally beguiling.

The tall, dashing Daniel Williams as Ted in particular is carefree and blissfully light on his feet, and reminded me of Ray Bolger (who famously was Scarecrow in “Wizard of Oz”). Williams (son of the late great director Bob Williams) really steals the show in the Independence Day song, “Let’s Say It With Firecrackers,” in which he seemingly throws down firecrackers that explode on stage (sound only).

In the upbeat, buoyant “Shakin’ The Blues Away,” the whole cast shows off remarkable energy, and the women do both dances while wearing wreaths around their waists, and some fast jump-roping.

Henning and VanSpeybroeck are genuinely winning and sympathetic as the romantic leads and it’s always enjoyable to accompany them on their adventurous ride. VanSpeybroeck is very moving in the poignant first-act lament “Nothing More to Say.” Jim and Linda’s first rendition of “White Christmas” is just magical, including some gorgeous harmonies toward the end. 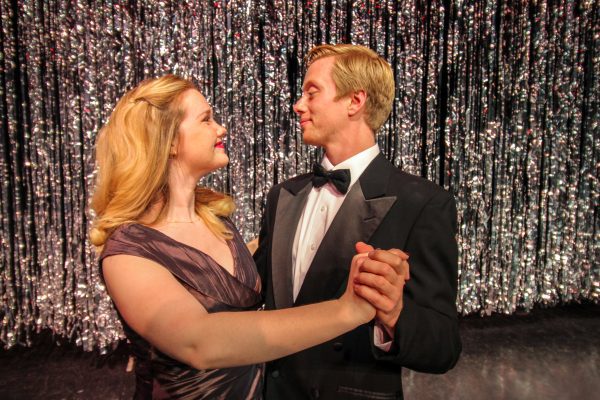 Carsell-Schaechter and Fah nail their feisty, independent roles as Lila and Louise, respectively. All the main female roles, down to spunky little Charlie (Charlotte), are tough, resilient characters who all stand up for what they want and what they do. Fah as the farmhouse caretaker has the most modern role – sarcastic, playfully boisterous, wise and supportive.

While “Holiday Inn” certainly doesn’t sing about all the main holidays (nothing for St. Patrick’s Day, Memorial Day, Labor Day or Halloween), there’s a breezy, flip-through-the calendar vibe, bringing us back to Christmas, natch, and an inevitable, glorious wedding (the biggest holiday of all). A brief black-and-white film clip (created by the cast to evoke the ‘40s era) is stunningly accurate to the period. It’s all a true gift, packaged with utmost care, to be treasured now and forever. Performances of “Holiday Inn” will be at 7:30 p.m. Dec. 2 (tonight), 3 and 4, and 2 p.m. on Sunday, Dec. 5. Tickets are $16 for adults, and $11 for children, available at 309-762-6610 or qcmusicguild.com. 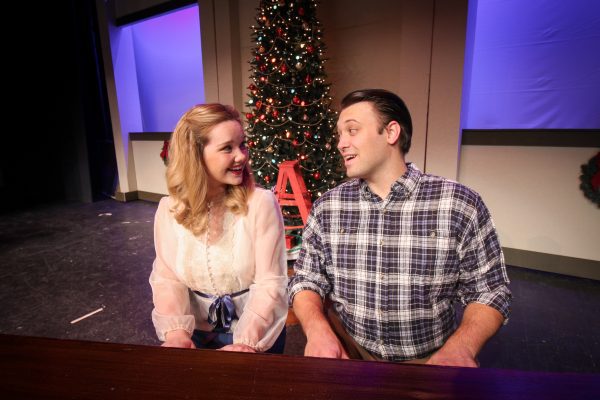