Home › Columns › Sean Leary › As Game of Thrones Ends, Who Will Finally Sit On The Iron Throne?

As Game of Thrones Ends, Who Will Finally Sit On The Iron Throne?

You might have heard just a little bit about a show called “Game of Thrones” on your social media.

And, if so, you might be aware that this coming weekend is the series finale. 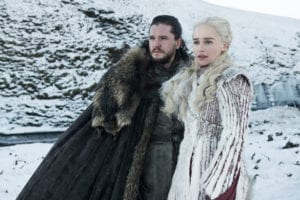 I can’t say I agree. I do agree that they should’ve stretched it out for more episodes to allow for greater character development, because things in the past couple episodes have seemed incredibly rushed.

Ok, if you’re still reading, you’re doing so at your own risk.

I agree that there should’ve been more character development to get Daenerys to the point where she went completely mad and genocidal. It’s not totally out of the blue, it’s not completely out of character, but having a few more episodes to build to it and increase the tension because you could tell it was coming would’ve been a great thing. Having a longer showdown between her and Cersei would’ve also been sweet, and having Jamie play a bigger role down the stretch, and Jon being set up as an antagonist as he watches Dany slowly poison would’ve also been much better in terms of narrative. We also haven’t seen nearly enough of Sansa and Tyrion and how they’re going to play into the final episode, and even Arya’s arc, while very satisfying, seems rushed.

The solution would’ve obviously been to have more episodes, or to wait until George R.R. Martin maybe got off his ass and finally wrote another damn book, but, it is what it is, and this weekend we’ll get to see where the show’s writers take it.

What will be really interesting is to see where Martin takes it AFTER the show, since he still owns the characters and universe and can write it and wrap it up however he sees fit. Will he follow what the show does? Highly unlikely. So it’ll be intriguing to see where he takes his universe in future books.

But, again, that’s all speculation.

So what do I think is going to happen?

Dany holds it currently, but you get the feeling her reign will be a very short one, given that they’ve basically bloodied her up as the villain of the series. But maybe that will be the not-so-surprising surprise, that in a show and book series that has repeatedly rewarded villains and killed off heroes, that in the end, the villain will hold the throne.

But I don’t think so. I think she’ll be killed in the next episode, by the person who will end up taking the iron throne.

Who’s going to kill her and get the crown?

I don’t see it being Tyrion. I don’t think he would want the responsibility. It’s not in his character. He seems more the type to be a consigliere, someone who works in the shadows and gets what he wants without as big a target on his head. So chances of him being on the throne are about zero, in my opinion. Likewise, I think chances of him dying are about zero. He’s a survivor, and I see him continuing along that path, as an advisor to the person who will be on the throne.

Will it be Sansa then? We’ve been seeing foreshadowing in that direction, with some of her cold confrontations with Dany, and the way her character has grown and learned the manipulations that would lead her to the throne. But… I don’t think so. I think she’s going to be killed, because she’s such an obvious contender to the throne. I think Dany, looking to consolidate her power, is going to take out Sansa in order to bring the north to heel.

And that leaves Arya and Jon Snow.

Jon Snow, as much as I’d like to see him live, is likely going to die. He’s the most like Ned Stark, by far, and the show has been setting him up in the same way, and I think, like Ned, he’s going to die due to his nobility, and due to his blood lineage and claim to the throne. Dany isn’t going to want to have him around and alive to potentially draw away from her shine. And Snow is too popular to keep alive. I see him dying in one of two ways, one of which is being killed overtly by Dany in some Ned-like fashion where he’s taken out.

The other way, I think, would be much more interesting.

And that’s in the midst of a grand final battle between Dany and her forces, and Arya and Jon.

I can see the episode beginning with Dany, moving to consolidate her power and dominate the north, going to give Winterfell the King’s Landing treatment, setting up a showdown between her and Sansa, with Jon being conflicted about it, Tyrion just wanting to get out of the way, and Bran, well, knowing how things are all going to go, and doing his usual cryptic Bran things.

In the battle, Sansa will be killed, and Bran will be wounded and on the chopping block, but… that’s when Jon will step in, to save him, and, also when Arya will return, to battle Dany. The three of them will square off, with Jon on the side of Arya, and ultimately sacrificing his life for hers, dying a noble death. His sacrifice will allow Arya to get the best of Dany and slay her, leaving Arya as the queen of the iron throne. Bran, having suffered serious injuries from Dany’s attack, will die in her arms, but not before saying some cryptic stuff about her future and the future of the kingdom, and that will leave Arya as the queen, with Tyrion emerging from his hiding to act as her consigliere.

However, this being Game of Thrones, the show will end with some foreshadowing of a future threat, and so, in the last minute of the series, we’ll see Arya on the throne, and slowly pan to a growing threat against her.

Sean Leary
Sean Leary is an author, director, artist, musician, producer and entrepreneur who has been writing professionally since debuting at age 11 in the pages of the Comics Buyers Guide. An honors graduate of the University of Southern California masters program, he has written over 50 books including the best-sellers The Arimathean, Every Number is Lucky to Someone and We Are All Characters.
See More Articles From Sean Leary
Tagged: AryaCerseiDaenerysGame of ThronesGeorge R.R. MartinHBOJon SnowKings LandingLannistersSansaTyrionWinterfell