It’s No Con: ‘Catch’ This Show At Music Guild 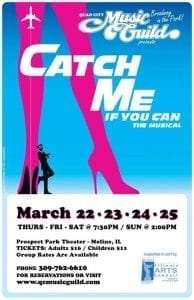 Based on the unbelievable true story of one of the most famous con artists in history, Catch Me If You Can, is coming to the QCA!

Quad City Music Guild presents Catch Me If You Can at the Prospect Park Auditorium (1584 34th Avenue Moline) this Thursday Mar 22 through Sunday Mar 25.

This bright and bouncy show features a sixties-influenced score by the Hairspray team of Marc Shaiman and Scott Wittman. The show is based on the 2002 film of the same name which starred Leonardo DiCaprio and follows the story of con man Frank Abagnale Jr.

Narrated by Frank as if his story is a television special, Catch Me draws audiences in to his web of relationships with his parents, FBI agent Hanratty and eventually his girlfriend and her parents. The show manages to walk the fine line of making Frank likeable in spite of his crimes. (From the show’s first scene, we know he’ll eventually pay for his misdeeds.)

Catch Me if You Can flew onto Broadway in April 2011 and ran for over 200 performances and is now on tour throughout the US. The show received critical praise and was nominated for four Tony Awards.  Whether or not you’ve seen Steven Spielberg’s hit movie based on the same subject matter, if you enjoy a comic caper, Catch Me If You Can is the musical to see.

Thursday, Friday and Saturday shows will begin at 7:30 and the matinee on Sunday will start at 2 p.m. Tickets are $16 for adults and $11 for children. Call (309) 762-6610 for reservations now! Visit the QCMG website at http://www.qcmusicguild.com/upcoming-shows/#catch for more information.

Shuttles from South Park Mall begin an hour before the show and pick up in the parking lot between JC Penny’s and Denny’s (closer to Denny’s). For your convenience, there will be a bus greeter to assist patrons. Doors to the theatre open a half hour before each show.

This a must-see show!

Advertisement
Tagged: Catch Me if You CanQC Music Guild