“The Sound of Music” may seem like an overdone, ancient warhorse – with its 1938 Austrian setting and ruthless, invading Nazis – but classics are classics for a reason.

Live theater presents the chance for actors to interpret iconic roles in their own way, putting their own spin on them, letting us see the familiar stories with fresh eyes, and absorb the messages and emotions in ways the original creators and performers could not have anticipated. The intolerance and hate speech reflected by the Third Reich in “Sound of Music” (which premiered in 1959) take on whole new meanings in our 2021 world. 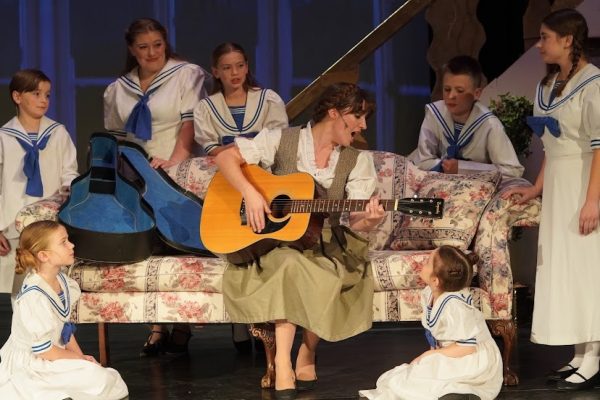 The new governess Maria and her charges in the “Do-Re-Mi” scene.

And due to the care and compassion Spotlight Theatre director Sara Tubbs shows in her massive, impressive new production, the last musical of the immortal (and just 16-year) partnership of Richard Rodgers and Oscar Hammerstein II carries profound lessons for us today – be kind, sensitive, honor the sacredness of love, be attentive, and stand up to evil at all costs.

Thanks to COVID, the beloved Rodgers & Hammerstein show was originally planned to run in December 2020, but got pushed back a year. “The Sound of Music” – which includes standards like “My Favorite Things,” “Do-Re-Mi,” “Edelweiss,” and the title tune – has been staged by Circa ’21, Rock Island, in 2014 and Quad City Music Guild, Moline, in 2004. 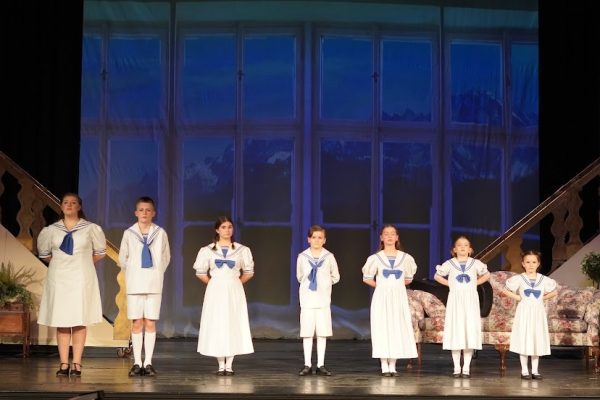 It’s also an obvious choice for Spotlight (which opened in 2018 at the imposing former Scottish Rite Cathedral, 1800 7th Ave., Moline), because of the story’s partial setting in an abbey, and the fact that the theater can use some drop-dead spectacular backdrops that were left in the building when Spotlight co-owners Brent and Sara Tubbs took over. 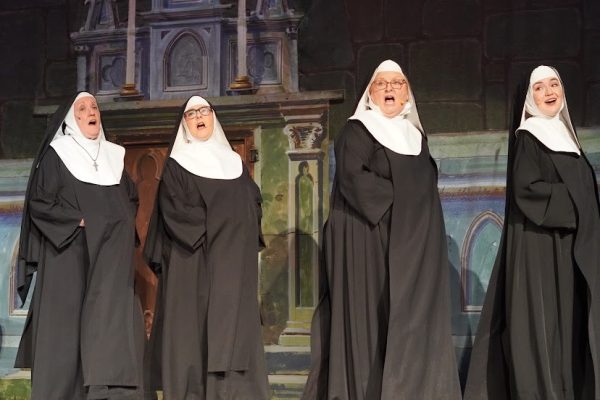 Sara Tubbs is doing her first solo directing here since summer 2019’s “Matilda” (she and Brent directed the Spotlight first musical, “Hunchback of Notre Dame” in fall 2018). I especially liked how much she made of the huge, soaring Spotlight space (the place seats about 500) – the nuns are mesmerizing at the start, entering from the audience in the dark with lit candles, in exquisite four-part harmony, in Latin, without accompaniment. Cast members at other key scenes also use the breadth of the theater, off the stage.

This “Sound of Music” uses full, orchestral accompaniment in pre-recorded tracks, which also requires some actors to mime playing guitar, but the singers themselves consistently display strong voices and well-defined characters.

Maynard and Sierra reveal the most remarkable, powerful sets of pipes. As Maria, Maynard gets plentiful opportunities to shine early on, in “The Sound of Music,” “My Favorite Things” and the absolutely adorable group number in the exuberant “Do-Re-Mi” with the kids. In the stage version, Maria has fun yodeling in “The Lonely Goatherd” to cheer up the children during a big thunderstorm, and here Maynard shows off some staggering high notes. It’s a very playful, joyful piece.

In the awe-inspiring Act I closer, Sierra as the Mother Abbess offers advice to a scared, confused Maria, who has run away from the von Trapp mansion after dancing with the Captain at a big party. Mother Abbess tells her that loving a man doesn’t mean you love God any less, and that love between people is holy, too. In the reverent, hopeful anthem “Climb Ev’ry Mountain,” Sierra stunningly knocks it out of the park, also with shattering high notes. 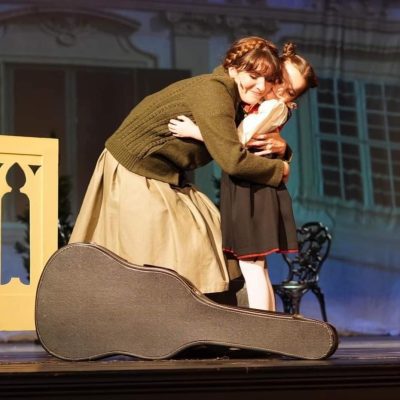 Lily Maynard as Maria hugs Betsy Bergthold as Gretl in “The Sound of Music.”

Another Act I highlight is the sprightly “Sixteen Going on Seventeen,” the delightful Liesl-Rolf duet done by Amber Whitaker and Max Robnett. He is very theatrical and showy, and she is more shy, but swooning in love. Their intricate dance is charming and expertly poised.

Angelo as the strict Captain (a widower who used to love music, but mourns the death of his first wife) is more problematic. Stiff, upright and uptight (befitting a military man), he certainly nails the initial cold, aloof head of this mansion, but I didn’t really buy his transformation into the softer, kinder-hearted, gentle man who falls for Maria. Maynard certainly is all spunk, fire, independence, sweetness and light, but I didn’t detect any real chemistry with Angelo, who shows more cardboard than charisma.

Angelo has a solid singing voice (“Edelweiss” and “Something Good” are lovely) and strong leader quality as the Captain, and his bravery and willingness to stand up to the Nazis in the second half are fittingly stirring and uplifting. I just wish we could be swept up in the romance of it all.

Chris Tracy and Kristen Marietta are also very good as Max and Elsa, while he is impish and boisterous, and she is more chilly, standoffish and not a good fit for Georg.

In addition to the gorgeous, bountiful music befitting a show with this title, the story and setting also make Spotlight’s offering both suspenseful and dramatic, and visually grand and breathtaking. The Nazis are literally on the march, invading Austria in 1938, and the von Trapps must find a way to escape, reprising the kids’ lively, cheerful “So Long, Farewell” at a big competition. 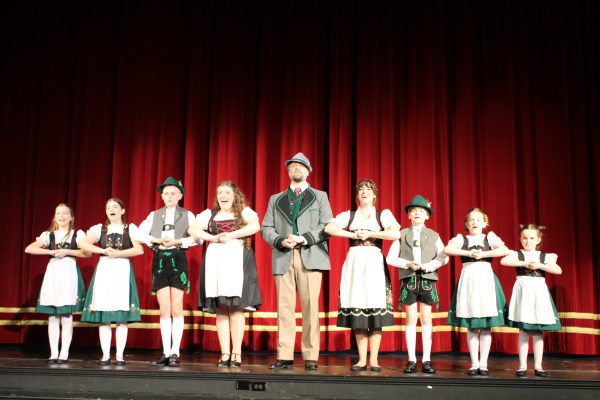 Here, four silent Nazi soldiers stand at scattered spots in the back of theater, silently menacing.

Sara and Spotlight also make great use of the cathedral backdrops and photo projections for many scenes, lending them a grandeur that would be very hard to match if new painted drops were made. The wedding scene makes perfect use of the aisle in the theater, and a popular backdrop (that was also used in “Hunchback” and many actual weddings here) creates an amazing, magnificent picture.

The terrifically talented “Sound of Music” crew includes Jon Jaworowski as music director, Michael Tarchala as choreographer, Sara Laufer as stage manager and Sara Wegener as costume designer. Remaining performances will be Sunday, Dec. 5 at 2 p.m., 7 p.m. Dec. 10-11, and 2 p.m. on Dec. 12. Tickets are $20, available at thespotlighttheatreqc.com or by calling 309-912-7647. 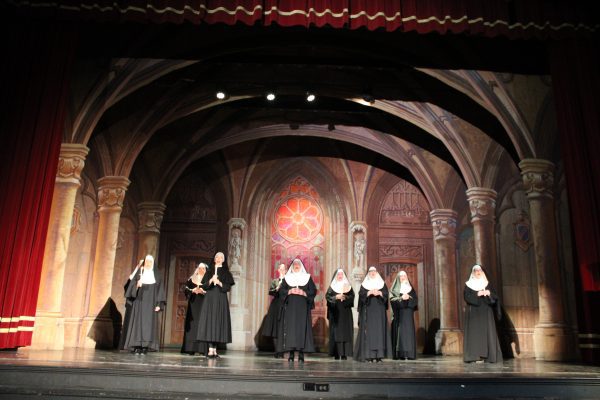 A group of nuns singing at the beginning of “The Sound of Music.” 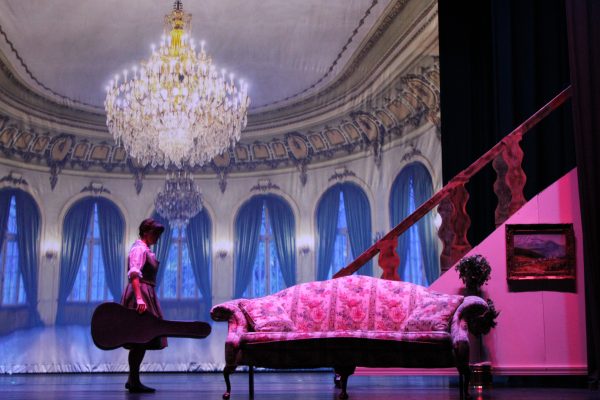 Lily Maynard as Maria holding her guitar in a mansion scene.