River Action’s first QC Environmental Film Series – which began in January 2020 – was interrupted by Covid-19, but will continue this Sunday, with the addition of a new youth video challenge.

River Action and Fresh Films will be accepting 3-5 minute video on local environmental issues related to the Mississippi River by students this year for submission into a new QC Environmental Film Series Student Video Competition. 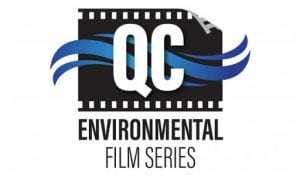 On Sunday, River Action has invited a professional videographer to come to the Figge Art Museum (225 W. 2nd St., Davenport) to lead a workshop for students, (middle school through college), to learn how to write, shoot, and edit their own videos. Just a few slots are left for the 10 students to meet at the Figge at 2:45 p.m. for the film workshop.

The students are invited to attend, for free, the QC Environmental Film Series showing of “Deer 139” and “Brower Youth Awards and Shorts of Conservation Activists” in the Figge theater.

Students are not required to attend the Sept. 13 workshop in order to submit a video to the competition.

The deadline for submitting videos is Nov. 15, with winners announced on Dec. 15. Each winning video will receive a $100 cash prize; $150 will be given to the student’s teacher to be used in their classroom, be featured in an article in the Eddy Magazine, and have their video be shown during the 2021 QC Environmental Film Series and featured on Fresh Films platforms.

The new Environmental Film Series started at the Figge in January with the 2018 documentary “The Biggest Little Farm,” and continued in February with the 2019 doc, “Overload: America’s Toxic Love Story.”

“Those were standing-room only. We had a really good response when we kicked it off,” River Action executive director Kathy Wine said Thursday. “We haven’t done a film series in the past, partnering with Nahant Marsh and the Singh Foundation. It was through a discussion we had with Tony Singh one day, the  possibility of doing something like this. After that conversation, we started to put it in place, select films, and we started doing that, with some help from The Sierra Club.”

For 13 years, there was an annual Environmental Film Fest — sponsored by the Eagle View Group of the Sierra Club, Augustana College and Radish Magazine. They started at the Davenport Unitarian Church and for several years were held at Olin Auditorium on the Augustana campus.

The Figge’s second-floor auditorium will have limited seating capacity for the new series Sunday, with showings at 2 p.m. and 4 p.m. 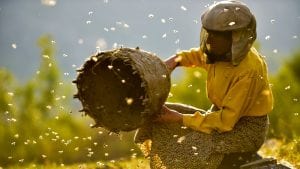 A still from Honeylandby Ljubomir Stefanov and Tamara Kotevska, an official selection of the World Cinema Documentary Competition at the 2019 Sundance Film Festival. Courtesy of Sundance Institute | photo by Samir Ljuma.

In the 2019 Brower Youth Awards and Shorts of Conservation Activists, the film tells how the award recognizes the work of six young leaders who are making strides in the environmental movement. A signature element of Earth Island Institute’s year-round New Leaders Initiative, Brower Youth Award winners demonstrate excellent leadership as well as a commitment to the communities their work serves.

That will be paired with “Deer 139” (2019), a documentary that shows five bold women who test their endurance and wits, as they brave the formidable, migratory journey of a pregnant, scrawny doe.

The remaining films in the series will be shown at the Blue Grass Drive-In (directions are available at riveraction.org/filmseries).

“Honeyland” (2019) will be Sunday, Sept. 20 at 7:30 p.m. In that documentary, Hatidze lives with her ailing mother in the mountains of Macedonia, making a living cultivating honey using ancient beekeeping traditions.

When an unruly family moves in next door, what at first seems like a balm for her solitude becomes a source of tension as they, too, want to practice beekeeping, while disregarding her advice. At the Sundance Film Festival, “Honeyland” won the World Cinema Grand Jury Prize, a Special Jury Award for Cinematography, and another Special Jury Award for Originality. 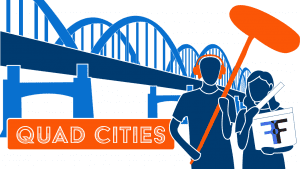 The nationwide Fresh Films is based at Augustana College, Rock Island.

It is called “an epic, visually stunning portrait of the delicate balance between nature and humanity that has something sweet for everyone.”

“Anthropocene: The Human Epoch” (2018) will be shown Sept. 27 at 7:30 p.m. A cinematic meditation on humanity’s massive reengineering of the planet, “Anthropocene” is a four-years-in-the-making documentary from the multiple-award winning team of Jennifer Baichwal, Nicholas de Pencier and Edward Burtynsky.

Third in a trilogy that includes “Manufactured Landscapes” (2006) and “Watermark” (2013), the film follows the research of an international body of scientists, the Anthropocene Working Group who, after nearly 10 years of research, are arguing that the Holocene Epoch gave way to the Anthropocene Epoch in the mid-twentieth century, because of profound and lasting human changes to the Earth.

Admission to each film will be $5 and a pass to all six films is available for $20.