In the first of many in a new cabaret series, The Mockingbird On Main will present “Wishes,” an evening of song, laughter and love with Wendy Czekalski. The one-woman cabaret will run at 8 p.m. Thursday to Saturday, Sept. 16-18, in the new theater at 320 N. Main St. 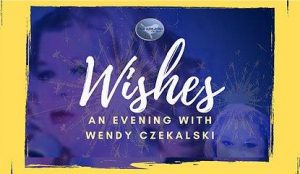 “Wishes” is named for her wish list of favorite songs and roles in musical theater.

Accompanied by Karl Bodenbender, Czekalski will serenade in a 75-minute program (no intermission) with such Broadway classics as “The Ladies Who Lunch,” “Old Friends,” “Losing My Mind,” “Maybe this Time,” “Meadowlark” and many more.

Since receiving her bachelor’s in vocal performance from Northern lllinois University, Czekalski (now 50) has appeared in numerous professional and regional productions. Some favorite roles include Trix the Aviatrix in “The Drowsy Chaperone,” Carmen in “Curtains,” Frieda/Betty in “Sunday in the Park With George,” God in “Hard to Believe,” Giovanna in “Rigoletto,” Ruth in
“Pirates of Penzance,” Katisha in “The Mikado,” Marion in “Titanic,” Madame De La Grande Buche in “Beauty and the Beast,” and Muzzie in “Thoroughly Modern Millie.”

The Mockingbird cabaret (in the space opened in late July by Tristan Tapscott and Savannah Bay Strandin) came about because it was a wish Czekalski had in the back of her head, something she wanted to do, somewhere, at some point. 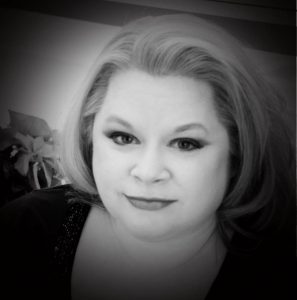 Wendy Czekalski (who turned 50 this year) majored in vocal performance at Northern Illinois University, and has a long list of professional and community theater credits.

“After Tristan and Savannah opened the new space, we were talking about the kind of things he was planning and wanting to do,” she said Sunday, noting they don’t have a traditional season of full shows. Tapscott loved the idea of her doing a cabaret in the intimate, 40-seat venue, with tables and chairs.

“I love it – it’s the only space like it in the area,” Czekalski said. “It just lends itself to this type of unique theater experience. It’s such a neat space. To me, I feel like it’s a true cabaret space. People are around the stage; it’s kind of perfect for that kind of thing.”

“Obviously, he took a leap of faith in opening a new space,” she said of Tapscott, who formerly ran the Harrison Hilltop Theatre in Davenport and District Theatre in Rock Island. “I do really enjoy the thought of what he envisioned it to be. To be that kind of unique space where he really wants people to use the space, to try things out.”

In a such a small theater, it’s not intimidating to be so close to audiences, Czekalski said, but rather energizing.

“The funny thing about a cabaret, it has more a casual, laid-back, playful feel to it,” she said. “It’s not really interactive with the audience, but to be that close, you can’t help but interact with the audience.”

“Wishes” refers to the fact that for a long time, Czekalski wanted to do a cabaret and a certain list of songs that she always wanted to sing, or roles she wished she could play. “It’s kind of my wish list of songs I always wished I could sing,” she said.

Her program includes “Keep Moving On,” from Tapscott and Danny White’s musical version of “A Christmas Carol,” which Czekalski has been in three different productions – most recently in December 2018 as a Countryside show at a community center in Princeton, Iowa, playing Mrs. Cratchit (who does that song). That’s the only number in “Wishes” that she’s actually performed on stage already. 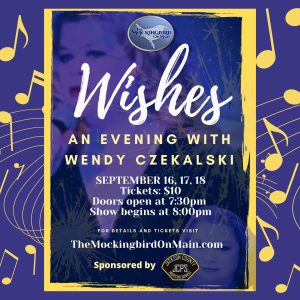 The poster for “Wishes,” a cabaret opening Thursday at Mockingbird on Main, downtown Davenport.

A well-known one she’ll do, “The Ladies Who Lunch,” was introduced in the landmark 1970 Stephen Sondheim musical “Company,” by the legendary Elaine Stritch.

Czekalski will play that bucket-list role, Joanne, in the Black Box Theatre (Moline) version this Oct. 7-16. She played Susan in the former District Theatre production of “Company” in 2012.

“Keep moving on” is also a line in another song Czekalski will sing (planned as a duet with Tapscott) – “Move On,” from her favorite show of all time, 1984’s “Sunday in the Park With George,” which earned Sondheim and book author James Lapine the Pulitzer Prize for drama.

She fondly recalled seeing it for the first time on PBS, when she was in high school. “It’s a story of this woman who’s in love with an artist who does love her back, but not in the way she wants him to or needs him to,” Czekalski said of the fictionalized version of the real French painter Georges Seurat (1859-1891). He completed the famous painting (which hangs at The Art Institute of Chicago) on which the show is based in 1886, at just 26 years old.

“Move On” takes place toward the 20th-century end of the show, when a modern George 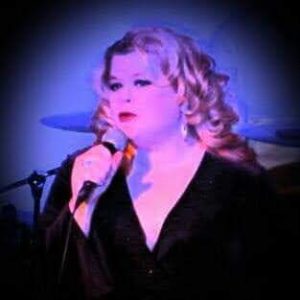 imagines 19th-century Dot back on the Parisian island, and she inspires him to stop worrying where he’s going, to create again, to just move on, and they finally connect emotionally. “They do love each other and in the end, she wants what’s best for him,” Czekalski said, noting she was in the Harrison Hilltop production of “Sunday” in 2010.

“These really are timeless themes – of new artists and new creation, and the backlash,” she said. “Now his paintings are revered and are considered high art, and masterpieces. So, that can be said of a lot of things – music, visual art, the new and different not being understood and not accepted until after sometimes a long window of time.”

There are several Sondheim songs in “Wishes,” and she reveres the composer partly for capturing “the frantic insanity of love gone wrong,” like no one else. “For me, the lyrics – the intelligence of the lyrics and even though I know a show, and think I’ve known a show for years, sometimes a lyric will just click again,” Czekalski said. “His lyrics are just insane, just mind-bending. The thing I appreciate the most are the clever, clever lyrics.” 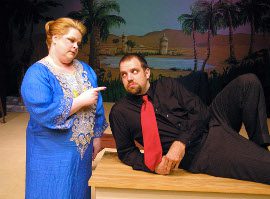 Czekalski played the role of God (seen here with Paul Workman as Satan) in “Hard to Believe” in 2010 at Playcrafters Barn Theatre.

One lyric that stands out for her is in the “Sunday in the Park” second act, in “Children and Art,” as Dot’s daughter Marie sings to contemporary George (her grandson) of the “Sunday” painting:

“Yes, he did love her,” Czekalski said of Seurat’s view of Dot, played on Broadway by Mandy Patinkin and Bernadette Peters. “ ‘Sunday in the Park’ is fiction, but themes of angst and relationship tumult are universal. I think everyone can relate to that.”

One of those clever lyrics also is in “Children and Art” – “The child is so sweet/and the girls are so rapturous/isn’t it lovely how artists can capture us?”

Like many, Czekalski sees many similarities between the obsessive, detail-oriented, groundbreaking genius of Seurat and the same in Sondheim, who’s now 91. Among other Sondheim pieces in the new cabaret are “The Miller’s Son,” “Not a Day Goes By” and “Losing My Mind.”

One non-Sondheim song in the show is “Tell Me on a Sunday,” from Andrew Lloyd Webber’s “Song and Dance” (1982), which also starred 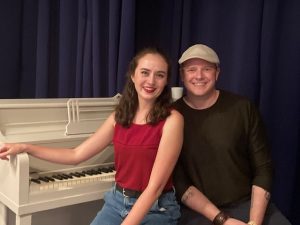 Mockingbird owners Tristan Tapscott and Savannah Bay Strandin at the piano in the Mockingbird.

Bernadette Peters. Czekalski said that is probably her favorite song from a musical. “I love that song,” she said.

She originally auditioned for the Black Box “Company” in February 2020, and they planned to stage it in fall 2020, until Covid scrapped those plans. Czekalski did her first Black Box show this past June, “Hate Mail,” which was a two-person show with Matt Walsh. The last pre-Covid production she was in was “Sister Act” in August 2019, at Music Guild.

“I did miss it, of course,” she said of her two-plus years without singing on stage. “But there is something to be said for being on vocal rest, basically. I missed it, but life was busy in other 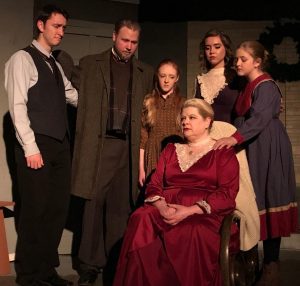 Czekalski was featured as Mrs. Cratchit in 2018 in Tristan Tapscott and Danny White’s musical version of “A Christmas Carol.”

ways.” Czekalski lives in Rock Island with her sister Tracy and eight-year-old niece, and spent much of the 2020-21 school year homeschooling her niece, Tessa.

She recently started a new part-time job as a paraprofessional at Eugene Field School in Rock Island, and works part-time for a friend’s cleaning company.

The weekend after “Wishes,” Czekalski will fulfill another musical wish — as a 50th-birthday present to herself, she is going with a good friend to Las Vegas to see Barry Manilow in concert, in the front row at the Westgate. 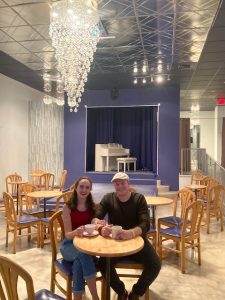 At Mockingbird on Main, all guests, artists, volunteers, staff, sponsors, and media are required to show valid proof of full vaccination in order to enter the downtown arts space. Proof of vaccination may be digital or a physical card.

​Children under 12 and unvaccinated patrons must provide proof of a negative Covid test no more than 72 hours prior to attending an indoor performance. Additionally, all guests will be required to wear masks when inside The Mockingbird. Face masks are available at the door should you need one.

​“This a public health crisis, the way out is truly a team effort and we will do our best to play our part,” says the theater site, www.themockingbirdonmain.com.

The strict Covid requirements are to help keep everyone safe, with which Czekalski wholeheartedly agrees.

“We’re just trying to do everything we can to keep theater spaces open, after this last year of people not being able to perform and make money at their livelihood,” she said. “So I completely understand all the precautions and the fact that we just need to keep each other safe.”

Tickets for “Wishes” are $10 and seating is very limited. For tickets and more information, visit www.themockingbirdonmain.com/coming-soon.

Jonathan Turner
Jonathan Turner has been covering the Quad-Cities arts scene for 25 years, first as a reporter with the Dispatch and Rock Island Argus, and then as a reporter with the Quad City Times. Jonathan is also an accomplished actor and musician who has been seen frequently on local theater stages, including the Bucktown Revue and Black Box Theatre.
See More Articles From Jonathan Turner
Advertisement
Tagged: mockingbird on mainmockingbird on main cabaretSavannah Bay StrandinTristan Tapscottwendy czekalskiwishes