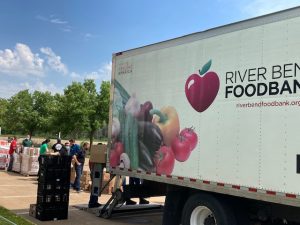 “Guests who are our neighbors, our colleagues, our friends and our loved ones,” Clark said. “It ensures that our home communities are just and decent places to live, especially during the hardest times.”

The John Deere Foundation has committed to dedicate $200 million over the next decade to a variety of causes, including $100 million to youth and families who live in their home communities – to ensure they have “equitable access to resources and opportunities that are critical to human dignity and self-sufficiency,” the foundation president said.

“As part of this, we are very proud to announce our new commitment of $1.7 million this year to River Bend,” Clark said. “We do this because we believe in River Bend, its mission, and we believe in everyone 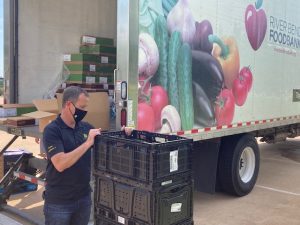 who makes the work of River Bend possible.”

Matt Dutton, a farmer from Alexis, Ill., and his wife Kristin are strong supporters of the Food Bank and its school backpack program.

“When we realized there were children in schools, sitting next to our own kids, that didn’t have food at home at night and weekends, it was pretty troubling,” Matt said. “As a farmer, we produce food, but there’s a disconnect between putting grain in the bin and that neighbor who may be up the road that doesn’t have any food to put on the table, and a lot of times we don’t even realize people in our own communities in that situation.”

River Bend gets the food to the people who need it, he said. The Duttons were part of a Food Bank video (produced by Deere) shown at Thursday’s press conference at Deere’s Moline Cylinder Works plant.

“The only thing it would take to put an end to hunger in our community is for us to commit to never throwing away food that could still be eaten by someone in need,” River Bend president/CEO Mike Miller said in the video.

The Food Bank is a 60,000-square foot distribution center in Davenport, that stocks 300 food pantries across 23 counties in eastern Iowa and western Illinois. In 2020, it provided food for 23.2 million meals, compared to 7.3 million distributed in 2014. The new Deere donation will alone help provide 8.5 million meals. 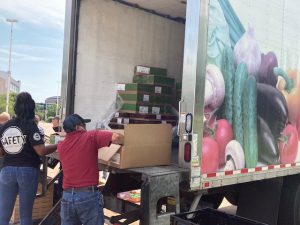 Dorothy Cotton is director of the Rock Island Second Baptist Church food pantry. Her brother Willie delivers on average 175-180 boxes of food (each box contains six meals) from River Bend to the food pantry, and they’re featured in the video.

“I’m not a biological mother, but I’m a foster parent and I took care of 213 kids and adopted 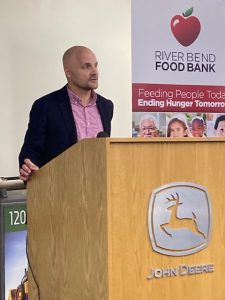 three,” Dorothy said. “The lady who used to run the food pantry got sick all of a sudden and passed away. The food pantry was closed and so there was a lady and her daughter knocked on the food pantry door, and I told them it wasn’t open and the little girl started crying. I asked her what was wrong, and she said. ‘I’m hungry.’”

Dorothy has been working for the pantry ever since. Miller said that every $1 donated to River Bend provides five meals to people in need.

“For $20, you provide 100 meals; for $100, you provide 500 meals,” he said. “It doesn’t take much to start thinking of the huge impact every community member can have to putting an end to hunger in our community.”

The Duttons have a 2,500-acre farm, growing corn and soybeans, plus hogs and cattle.

The backpack program in schools made hunger personal, Kristin Dutton said in the video. “There’s kids our kids go to school with who don’t have food for the weekend, and that makes it really personal and that’s when I started to feel like it’s really important – when it’s not just people you don’t know but it’s kids who our kids are in school with, their friends.”

In the backpack program, area students in the free and reduced-school lunch program can take a backpack full of six meals on Fridays, Miller 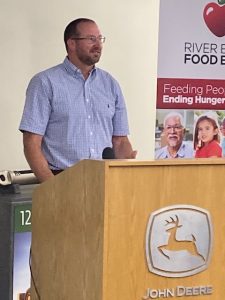 Matt Dutton, a farmer from Alexis, Ill., spoke about why he supports the Food Bank Thursday at John Deere Cylinder Works.

“We’ve been blessed in many ways and we’re happy that we’re able to bless others through our donations to River Bend,” Matt Dutton said. “We know the money is being used well to help people in our area. By helping River Bend here, you’re actually helping feed people.”

“What they provide the local community here is very much needed,” Jack Hernandez, a NorthPark Mall food pantry guest, said in the video. “They truly impact a lot of needy families here in our local communities. That’s very appreciated.”

“The video will go a long way in helping us tell the story of River Bend Food Bank,” Miller said at Deere Thursday.

“There is no reason for anyone to be going hungry in America,” he said. “In the 23 counties served by River Bend Food Bank, one in nine people – and one in six children – do not have enough food. In a country that wastes one-third of the food that we produce, which is enough food to feed everyone, we just throw it away.

“Hunger is a completely solvable problem, which is why we have River Bend Food Bank,” Miller said.

“John Deere has been with us every step of the way,” he said. “The wonderful thing about John Deere is that a financial commitment always comes with an army of volunteers. Because Deere isn’t just a great company; it’s a company with great people. 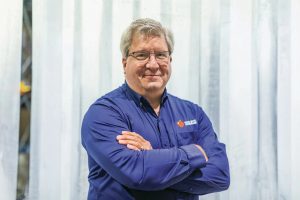 “On behalf of River Bend Food Bank’s 41 employees, 300 partner agencies, 4,000 volunteers, 10,000 donors, and most importantly the 115,000 people and 35,000 children who don’t have enough food – many thanks, not only to Deere & Company, but to every one of your employees for helping to end hunger in our community,” Miller said.

In the last 10 years alone, Deere employees have given 15,000 volunteer hours for River Bend, which is on top of all the donations of food and money, Clark said. About two dozen Deere employees were out Thursday morning working to distribute food from a River Bend truck in the TaxSlayer Center parking lot.

Part of the new Deere donation is to enhance River Bend’s capacity to respond to the negative effects of Covid on the region’s economy, he said. In a typical year, Deere and its employees would give $300,000 to $500,000 for River Bend.

“Covid really revealed a lot of cracks in the social safety net – one of the largest cracks is when you lose jobs, people can’t feed themselves,” Clark said. “This was a significant and accelerated grant.” 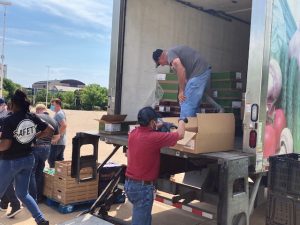 “We want to keep distributing this much food and more, ‘cause that’s what it’s going to take to truly put an end to the problem,” Miller said.

Deere’s increased donation will definitely help the Food Bank increase capacity, he said, after having tripled over the past six years.

“We have to figure out how to continue to sustain that,” Miller said. “We opened a branch in Dubuque back in 2019 and we recently announced we’re gonna open a branch in Galesburg later this year. There will be even more announcements to come about how we’ll grow capacity and put an end to this problem.”

River Bend is working to renovate a building in Galesburg, to provide greater access to more nutritious and perishable foods for more than 50 food pantries in eight Illinois counties.

It will supply food for not only the Galesburg Community Foundation’s service area of Knox and Warren counties, but also Fulton, Hancock, Henderson, Henry, McDonough and Stark counties.

In addition to the new River Bend Galesburg Branch, FISH of Galesburg will re-locate to the space, allowing for greater guest access and

allow FISH to increase their pantry offerings. Guests of FISH Food Pantry will continue to have their needs met from FISH’s current location until construction on the new location is complete.

The new branch will be at the corner of Main and Henderson streets in Galesburg.

The Community Foundation purchased the building in December 2020, and River Bend will be a 15-year tenant of the property, with the opportunity for multiple lease renewals after the initial 15 years. The location was chosen after years of monitoring available real estate opportunities.

This specific location was picked as it provides easier access for the service area to obtain fresh produce and frozen protein and will reduce the amount of time spent by area food pantries that currently must pick up food to distribute from River Bend’s Q-C location, at 4010 Kimmel Drive, Davenport.