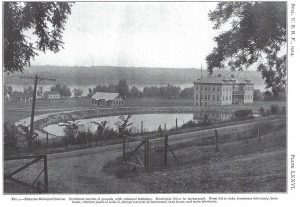 A major objective of the signage project is to convey the important interdependent relationship between the Fairport Fish Hatchery, Mississippi River mussels, and the pearl button industry, which dominated Muscatine from the 1890s to the early 1930s.

pearl button industry.  The original laboratory building was opened in 1914 along with a small village of cottages to house staff and visiting dignitaries.

The educational signage will also focus on the various human impacts that precipitated the decline of mussels from the river. An important aspect of the proposed signs is the use of QR Codes which will allow students and other visitors to access additional background information online through their cell phones. Ultimately, the goal of the project is to educate students of all ages … on site and virtually … and to promote ecotourism to Muscatine County.

Sandy Stevens, president of Friends of Fairport Fish Hatchery (FFFH) has invited representatives of DNR, county government, FFFH representatives, project team members and other interested parties to a grant kickoff event.  The meeting will be held at 10am, Thursday, July 29 at the Muscatine County Administration Building located at 414 E. 3rd Street in Muscatine.  Jim Elias of Sunrise Galleries in Muscatine will present a preliminary look at the proposed signage and use of QR codes.

In addition to the grant funding, another $40,144 of in-kind goods and services are being made available from various volunteers to support this educational project.  The Friends of Fairport Fish Hatchery is a volunteer organization which was formed last year as an adjunct of the Muscatine County Historic Preservation Commission.