The Figge Art Museum has acquired an early painting by renowned American artist Kehinde Wiley, who’s best known for being commissioned to paint the official presidential portrait of Barack Obama for the Smithsonian National Portrait Gallery. 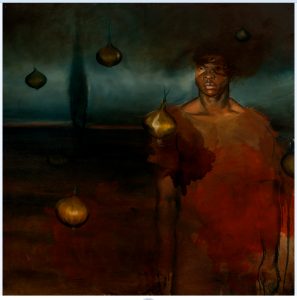 The untitled oil-on-plywood panel painting recently acquired by the Figge was done in 1998, while Wiley was an undergraduate at the San Francisco Art Institute. Now 44 and based in New York City, he graduated with a BFA in 1999 and received his MFA from Yale in 2001. This work demonstrates Wiley’s artistic mastery and vision while still a young man, according to a recent Figge release.  Wiley was included in Time magazine’s 100 Most Influential People of 2018.

“The untitled painting is from an early series when I was a student, exploring the figure in a landscape,” Wiley said in the release. “It was during this body of work that I began formalizing my relationship with the body and the ground, with the field and the sitter. Actually visualizing the landscape itself as a type of timeline, where the horizon line represents the past while the figure represents the present tense.

“These are notions of past and present which run throughout the history of the Western canon of painting,” the artist said. “I was specifically interested in pointing to the notion of malleable 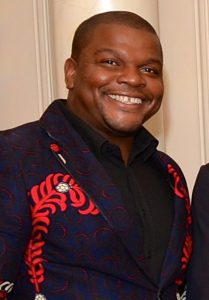 New York-based Kehinde Wiley — who was commissioned to create the presidential portrait of Barack Obama — earned his master’s in fine arts from Yale and a BFA from the San Francisco Art Institute.

identity, whether as who you are now, who you have been, or who you might be perceived as ‘being.’ This was a useful metaphor for me in that respect, because I was engaging it as a type of signifier of layers—layers of identity, layers of self, layers of sexuality, gender, etc.”

“We are overjoyed to have acquired this important early work by Kehinde Wiley,” said Figge executive director and CEO Michelle Hargrave. “His mastery of the medium at such a young age should serve as inspiration for young artists in our community and beyond.  We are fortunate to include this wonderful work in the Figge’s increasingly diverse and important permanent collection.”

Wiley’s history-making portrait of Barack Obama (2018) is currently on a five-city tour, the first stop being the Art Institute of Chicago, where the Obama portraits exhibition (including Michelle Obama) is on view through Aug. 15. According to the National Portrait Gallery, Wiley is known for his vibrant, large-scale paintings of African-Americans posing as famous figures from the history of Western art.

“This portrait does not include an underlying art historical reference, but some of the flowers in the background carry special meaning for Obama,” according to https://npg.si.edu/exhibition/former-president-barack-obama-artist-kehinde-wiley. “The chrysanthe­mums, for example, reference the official flower of Chicago. The jasmine evokes Hawaii, where he spent the majority of his childhood, and the African blue lilies stand in for his late Kenyan father.”

The 1998 painting was actually acquired by the Figge this past year, as part of its broad effort to diversify its collection. Last month, it 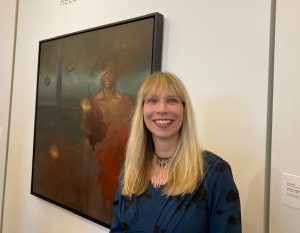 Figge executive director Michelle Hargrave stands with an untitled 1998 painting by renowned African-American artist Kehinde Wiley, which will be displayed in the Figge lobby through Sept. 24.

showcased the painting in the Quad City Bank & Trust Grand Lobby, when the museum announced creation of the Art Diversity and Equity Fund, dedicated to the acquisition and preservation of artworks for the Figge’s permanent collection that represent artists from underserved and marginalized groups.

The groups that the planned $100,000 fund will impact are Black artists, artists of African, Native American, Hispanic, Latinx, Asian, Pacific Islander, Indigenous and Middle Eastern descent as well as works from women, LBGTQA+, and any other artists that are subsequently 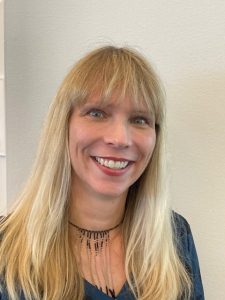 identified as marginalized, oppressed, or underrepresented in the museum’s permanent collection.

“We spent 98% of our acquisition dollars on works by female artists or artists from underrepresented and historically marginalized communities,” Hargrave said of acquisitions in the 2020-21 fiscal year, noting the Wiley was one of those works. “We’ve made some significant progress with the fund, but are still in the process of fundraising for it in order to meet our goal.”