Squirrel Nut Zippers, with The Gentlemen’s Anti-Temperance League will be taking the stage at the River Music Experience’s (129 N Main Street Davenport) Redstone Room this Wednesday Jan 29. Doors open at 7 p.m. and the shows begin at 7:30 p.m. 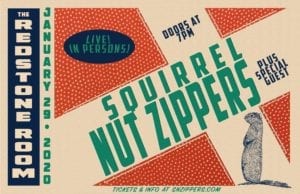 The Squirrel Nut Zippers began their musical journey in Chapel Hill, North Carolina, in the mid 1990’s, as a musician’s escape from the cookie cutter world of modern rock radio at the time. Jimbo Mathus along with drummer/percussionist Chris Phillips formed the band as a casual musical foray among friends and family in the area. It wasn’t long before the band’s quirky mix of Jazz chords, Folk music, and Punk Rock leanings spread out of the region and attracted a national audience.

Between 1995-2000 the Squirrel Nut Zippers sold over three million albums. Their watershed album, Hot (1996) was recorded in the heat of New Orleans, fueled by a smoldering mix of booze and a youthful hunger to unlock the secrets of old world jazz. This passion mixed with Klezmer, Blues, Americana and random bits of contemporary music became the bands signature style. At the time, there were few other bands inhabiting this space. The album would eventually break free of any “jazz” stereotypes and land on commercial radio, taking the band to remarkable heights for what was essentially an anti-establishment sound.

Since reactivating in mid-2016 the Squirrel Nut Zippers have been performing to packed houses across the country and around the world. As band leader Jimbo Mathus has said since the band’s re-launch, ‘it’s not a reunion, it’s a revival!’ In 2018, the revival included the band’s first new studio album in eighteen years titled Beasts Of Burgundy. The album debuted at #4 on the Billboard Jazz Albums Chart upon its release and the critics raved:

“There is, of course, jazz of various stripes (mainly pre-WWII varieties) on this deliciously wide-ranging comeback, but there’s so much more: sounds, identifiable and not, emanating from mysterious times and places, not the least of which is New Orleans, their home base, a land that, forever and still, has a mind of its own.” – Relix

The Redstone Room at River Music Experience is a standing room only concert venue. All tickets are General Admission unless otherwise stated. For the comfort of our guests, a limited amount of seating is available on a first come first serve basis:

Reserved Tables: a limited number of tables are for sale in advance, sold through our ticketing service. You will need to add both your General Admission tickets AND your Reserved Tables to the cart for purchase. Reserve Tables come with 4 seats to a table.

Disability: If you require handicap accessible seating, you will need to purchase your General Admission ticket first, and then call the box office to reserve up to 2 seats. Tables must be purchased separately.