Sean Leary September 28th, 2018 Things To Do, Rock Island, Local, Fun, Entertainment, Comedy Share:
After two outstanding preliminary rounds on Sept. 8 and 15 with stand-up comedians from across the Midwest and from as far away as St Louis, The Speakeasy in downtown Rock Island is now down to the top 10 competing for the chance to win $1,000 and be crowned as Speakeasy Laugh Hard Champion on Sept. 29.
QuadCities.com is a proud sponsor of the Speakeasy Laugh Hard Competition. 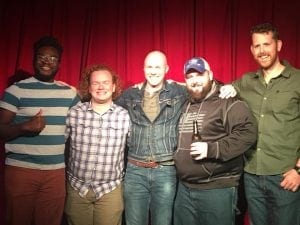 “We are so excited about this show on the 29th” said Brett Hitchcock, director of audience development. “We’ve had so many talented comics perform during this month. It was really difficult for the judges to narrow this field to the top 10! The 10 competing on the 29th are all outstanding comics and will be bringing out their best material that night trying to win the $1,000. It’s also nice to see one Quad City comic make the top 10” said Hitchcock. “It’s a testament to the quality of stand up comedy across the Midwest.”
Hitchcock encourages everyone to get their tickets early as this show will sell out! Tickets for the finals are $12 per person in advance and $15 the day of the show and can be reserved by calling 309-786-7733, Ext. 2 or online atwww.thecirca21speakeasy.com. You must be 18 or older to attend.
The comedians will be judged in a number of areas including material, stage presence and audience response. If you’re a friend of one of those competing, come out and show your support – it could help make the difference!
The ten finalists are…..
Brian McDowell – Belleville, IL
Ryan Graham – Dubuque, IA
Jameson Cox – Cedar Rapids, IA
Adam McShane – McFarland, WI
Edgar Sandoval – Pekin, IL
Michael Maxwell – Rolling Meadows, IL
Matthew Jacobson – Des Moines, IA
Beckett Kenny – West Peoria, IL
Al Nipson – Springfield, IL
Stevie Mo – Rock Island, IL
Come out and laugh while watching some of the best stand-up comics in the Midwest on Sept. 29!

Sean Leary
Sean Leary is an author, director, artist, musician, producer and entrepreneur who has been writing professionally since debuting at age 11 in the pages of the Comics Buyers Guide. An honors graduate of the University of Southern California masters program, he has written over 50 books including the best-sellers The Arimathean, Every Number is Lucky to Someone and We Are All Characters.
See More Articles From Sean Leary
Advertisement
Tagged: Adam McShaneAl NipsonBeckett KennyBrett HitchcockBrian McDowellEdgar SandovalJameson CoxLaugh Hardlocal comedyMatthew JacobsonMichael MaxwellQuad-Cities comedy sceneRyan GrahamSpeakeasystandup comedyStevie Mo