Sean Leary May 13th, 2022 Music, Live Music, Events, Entertainment, Davenport, Arts & Entertainment News Share:
The trademark sound of Russell Hitchcock’s soaring tenor voice and Graham Russell’s simple yet majestic songs created a unique sound that would forever be known as Air Supply. That band will perform at 8 p.m. Friday night at Rhythm City Casino in Davenport.
However, it is the live shows that always hold audiences captive around the world. They were the first Western group to tour China, Taiwan, and countless other countries that before would not allow pop music across their borders. In 1983 they recorded “Making Love Out Of Nothing At All” by Jim Steinman which solidified the group as a permanent force in modern music. This song was released on The Greatest Hits album which soared past 7 million copies. 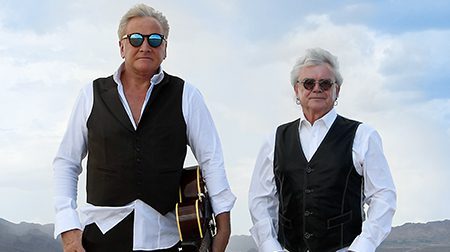 Just weeks after composer and vocalist Graham Russell was honored with a BMI Million-Air Certificate recognizing 3 million performances of the duo’s hit “All Out Of Love,” Air Supply’s new song was the #1 most added track on the FMQB AC40 Chart, and also one of the most added on the R&R (Radio and Records) AC Chart and the Mediabase AC chart.
In 2013, the duo was inducted into the Australian Recording Industry Association’s Hall of Fame. Air Supply celebrated their 40th anniversary in 2015 and continue to delight audiences all over the world.
Tickets are $70, $60, $50, $45 and $40 plus applicable online/phone ticketing fee (this fee is waived when tickets are purchased at The Market Gift Shop inside Rhythm City Casino Resort). All ages are welcome to attend. Tickets in the ADA section are for patrons with mobility disabilities and up to three companions. If companion seating is not available because the ADA section is sold out, Rhythm City Casino Resort will offer other seats as close as possible to the accessible seat, if available, at the purchase price of the original section.

Sean Leary
Sean Leary is an author, director, artist, musician, producer and entrepreneur who has been writing professionally since debuting at age 11 in the pages of the Comics Buyers Guide. An honors graduate of the University of Southern California masters program, he has written over 50 books including the best-sellers The Arimathean, Every Number is Lucky to Someone and We Are All Characters.
See More Articles From Sean Leary
Advertisement
Tagged: air supplyair supply coming to rhythm city