Rehearsals will begin in May and will be scheduled based on actors’ availability.

Actors should come prepared to cold-read from the script.

A dark comedic coming-of-age tale surrounding a cast of familiar characters. The Peanuts gang are all in high school and, with the death of his beloved beagle, C.B finds himself tackling adult topics. As a now-popular jock, he finds himself drawn to a lonely piano-playing outsider. While being typical teenagers, the gang are each grappling with issues of homophobia, mental health, death and the afterlife, alcoholism, identity crisis, and growing apart from the people you loved most. A poignant, funny, gut-punching and uniquely-crafted script that will sit in your soul for years to come.

Casting Requirements:
All roles are 18+/any race/all genders

CB: The Popular, Confident Jock, whose faithful dog’s violent death suddenly has him questioning his place in life, his mental health, and his sexuality.

CB’s Sister: Constantly trying on new identities, She is The epitome of ‘artsy’, with a biting wit, she also revels in being ‘different’. She has no problem standing up to others, especially her big brother and his friends.

Matt: Attractive, Loud, Uninhibited. He would be annoying if he wasn’t so darn charming, not to mention he always has the ‘hookup’. He is all about the Party, but there is a very angry kid just below the surface.

Tricia: The Queen B/ Mean girl rolled into one. Her own insecurities fueled her to become the HBIC, but she loves her friends, who keep her grounded, while also still feeding into her toxicity. (Open Gender Casting)

Marcy: Tricia’s BFF and sidekick, the Gretchen to Her Regina…She and Tricia at times seem to share a brain, even though Marcy is the smartest out of them all. She downplays her intelligence because she is a follower by nature.

Van: A Modern Hipster Stoner, whose entire personality seems to revolve around marijuana. He’s ‘Jay and Silent Bob’ Meets ‘Portlandia’. He tends to be the calm one of the group, but he makes his opinions known.

All other roles have been cast.

If you are interested in being on the staff or working backstage, email office@playcrafters.com or reach out to the director at auditions for information about opportunities for volunteering! 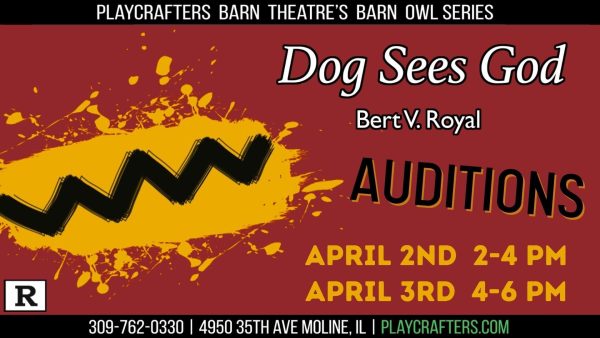