Glynn made her television debut in 1987 on the short-lived NBC musical, Rags to Riches. The following year, she guest-starred as Susan Fryman on the ABC sitcom Growing Pains. Glynn first became associated with the horror genre when she guest-starred on an episode of Freddy’s Nightmares, the series based on the Nightmare on Elm Street franchise. 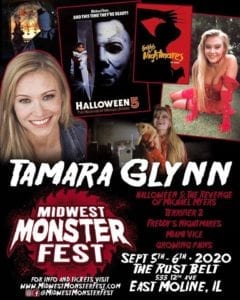 She appears as Laura in the episode “Love Stinks”, directed by John Lafia and co-starring Jeffrey Combs. She also appeared on the daytime soap opera Knots Landing, as well as the series finale of the hit crime drama Miami Vice.

At the age of 20, she played the role of Samantha in Halloween 5: The Revenge of Michael Myers. Halloween 5 was released in the United States on October 13, 1989. In 1998, she filmed a role in Daddy and Them, a dark comedy about a dysfunctional Arkansas family, starring, written, and directed by Billy Bob Thornton. She stars as a paramedic who attends to Thornton after a car crash, igniting the jealousy of his wife (Laura Dern). The film also features Diane Ladd, Ben Affleck, Andy Griffith, Jamie Lee Curtis and Jim Varney in his final performance.

Sean Leary
Sean Leary is an author, director, artist, musician, producer and entrepreneur who has been writing professionally since debuting at age 11 in the pages of the Comics Buyers Guide. An honors graduate of the University of Southern California masters program, he has written over 50 books including the best-sellers The Arimathean, Every Number is Lucky to Someone and We Are All Characters.
See More Articles From Sean Leary
Tagged: East MolineHalloweenhalloween 5horrorconJeff O'NeilMidwest Monster Festmidwest monster fest 2020Rust Belttamara glynn