Live Coverage Of Randle Camp Ready To Hoop It Up 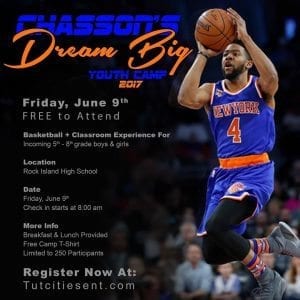 QCSportsNet’s Ken Jacoby, lead play-by-play announcer for Rocky sports, and Dallon Christensen will anchor the live coverage, on Friday, June 9, from 11:30 a.m. to 1:00 p.m.  It is expected to feature interviews with Randle, as well as camp instructors.  The roster of instructors includes…

Sean Leary
Sean Leary is an author, director, artist, musician, producer and entrepreneur who has been writing professionally since debuting at age 11 in the pages of the Comics Buyers Guide. An honors graduate of the University of Southern California masters program, he has written over 50 books including the best-sellers The Arimathean, Every Number is Lucky to Someone and We Are All Characters.
See More Articles From Sean Leary
Tagged: Chasson RandleKen JacobyNew York KnicksRock Island basketballRock Island High School