After an invitation-only reception last Thursday featuring live music, the Redstone Room on the second floor of River Music Experience (129 Main St., Davenport) finally reopens for a public concert this Thursday, at 8 p.m., with an All Sweat Series “Island Del Soul” event, with several artists. Tickets are $15 in advance and $18 at the door. 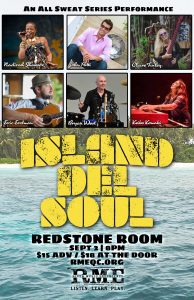 An All Sweat Series “Island Del Soul” concert will start Thursday at 8 pm. at the Redstone Room.

The RME provided the following description of the lineup:

Jonathan Turner
Jonathan Turner has been covering the Quad-Cities arts scene for 25 years, first as a reporter with the Dispatch and Rock Island Argus, and then as a reporter with the Quad City Times. Jonathan is also an accomplished actor and musician who has been seen frequently on local theater stages, including the Bucktown Revue and Black Box Theatre.
See More Articles From Jonathan Turner
Tagged: Alan SweetAll Sweat Productionsbryan westeric erdmanisland de la soulkeiko komakiRiver Music Experience