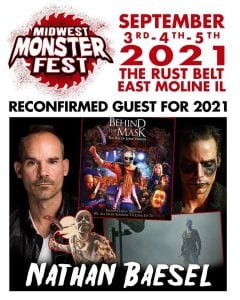 Baesel graduated from the Juilliard School of Drama.

He has appeared in various national television spots and guest starred in The District and CBS’s Cold Case.

He had a recurring role on ABC’s science fiction drama Shaun Cassidy’s Invasion, playing the one-armed deputy Lewis Sirk. As well as various roles in shows such as, C.S.I, C.S.I.:Miami, Without a Trace, Journeyman and more.

Nathan is a founding member of NY-based Theater Mitu and he performs regularly for South Coast Repertory. One of his best known roles is in the horror/comedy cult classic as the titular character; Behind the Mask: The Rise of Leslie Vernon.

Sean Leary
Sean Leary is an author, director, artist, musician, producer and entrepreneur who has been writing professionally since debuting at age 11 in the pages of the Comics Buyers Guide. An honors graduate of the University of Southern California masters program, he has written over 50 books including the best-sellers The Arimathean, Every Number is Lucky to Someone and We Are All Characters.
See More Articles From Sean Leary
Tagged: behind the maskEast Molinejuilliard school of dramaleslie vernonmidwest monster fest 2021nathan baeselRust Belt