LEAVE! GET OUT! Find Out Why Boys Stink In The Video You Deserve

If you were listening to pop radio at all at the beginning of the 2000s, you couldn’t help but escape an incredibly catchy and soulfully sung hit

with a defiant chorus of “Get out! Right now! It’s the end of you and me! It’s too late, and I can’t wait for you to be gone!”

My girlfriend at the time had a pre-teen younger sister who we used to babysit from time to time, and take to the fair and mini-golfing and stuff like that, and whenever this song would come on the radio, she’d want us to jam the volume to the max. Which, you know, when you’ve got the windows rolled down, and you’re an adult male in his late twenties/early thirties, is really, really, cool and not odd at all.

Upon first singing the song, I both assumed that the singer was African-American and somewhere in her twenties. I was wrong on both, and so were a great many others who hadn’t seen the video before they heard it, judging by a number of reviews and pieces of music journalism at the time.

But, sure enough, we were wrong. (It happens. Even for journalists.)

“Leave (Get Out)” was the debut single by a 13-year-old American singer named JoJo, from her self-titled debut studio album (2004). The song, ubiquitous on radio for about a year during the time when we were preparing for a presidential election and new episodes of “The OC,” was released Feb. 24, 2004. It became a worldwide hit, topping the charts in the U.S. (making her the youngest female solo singer to ever have a number one in the U.S. up to that time), and hitting number two in the United Kingdom, Australia, New Zealand, and on the European Hot 100 Singles.

It also reached the top five in Belgium, Ireland, the Netherlands, and Switzerland. The single was certified gold by the Recording Industry Association of America (RIAA) on October 25, 2004.

The reason for its success is obvious. The song is a terrific bit of pop, with a huge, anthemic chorus, a universal theme of heartache, great production and just the right amount of quirkiness with the guitar bit and other little sonic touches. But the strangest behind-the-scenes twist of the tune’s chart reign was the fact that JoJo was not, in fact, as most people initially thought when they heard the song, a grown women, regardless of ethnicity. She was, in fact, a 13-year-old white girl. A young Taylor Swift, I’m sure, was both totes jelly, and, also, taking copious notes in regard to this tune and its subject matter. 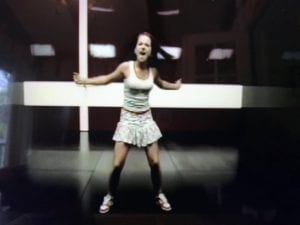 “Boys stink! Just check out my tank top!” Wise words, from JoJo, and her t-shirt.

The video and song are actually pretty hilarious when you listen to the lyrics, and consider she’s only 13. The “boys stink” tank top is a laugh riot of a wardrobe choice, the setting switches between the green lockers and the bathroom is hilariously accurate in regard to the “Melrose Place” style tween drama going on here, and JoJo’s innate sassiness is pretty much de rigeur for any kid on the Disney Channel now.

As for the lyrics, they’re surprisingly adult, not in terms of language, but thematically, in regard to how seriously this is being taken.

For one thing, the early rhyming or lack thereof of “bae” and “me” is pretty laugh inducing. Also, I’m not sure anyone after the year 1800 was seriously thinking about

There goes the last great American dynasty. And, probably, an empty bottle of Bath and Body Works spray perfume that smells like cotton candy.

“forever” at the age of 13, and it’s both sad and interesting that there’s this much heartbreak and angst over the end of a relationship taking place in junior high.

Boy, get used to this crap, sweetheart. Sad to say, it ain’t gonna get any better. lol

Typically enough for a teen star, JoJo later rebelled against the song and video, which she felt portrayed her in too much of a bubblegum pop light.

After the spotlight had faded a bit, she did what teen stars have done since the ’70s or so, and she embraced a more mature persona that she felt was in line with her talent.

But she never really followed the smash success of her first album. She continues to tour, and at times will rearrange “Leave (Get Out)” to be more jazzy or heavy metal in concerts. It’s always interesting to me to see acts do that and disavow their past, although hey, it’s their past and they can do with it what they want. And if you don’t like it, you can…

GET OUT! RIGHT NOW!

Here’s your Video You Deserve…

Sean Leary
Sean Leary is an author, director, artist, musician, producer and entrepreneur who has been writing professionally since debuting at age 11 in the pages of the Comics Buyers Guide. An honors graduate of the University of Southern California masters program, he has written over 50 books including the best-sellers The Arimathean, Every Number is Lucky to Someone and We Are All Characters.
See More Articles From Sean Leary
Tagged: boys stinkdisney channelJoJojunior high dramaleave get outmelrose placevideo you deserve