Home › Articles › Things To Do › Truckfighters, Valley of the Sun, Daykeeper Rev Into RIBCO

Heavy music devotees in the QCA are used to high-quality touring bands stopping at the Rock Island Brewing Company with clockwork regularity. This Saturday’s bill, however, will cause even the most complacent headbanger to take note. Swedish desert rockers Truckfighters are back from a short breakup, and, with Ohio’s Valley of the Sun in tow, are visiting Rock Island for the first time in years. Wake Brewing, the heaviest brewery in the Midwest, is presenting this riff party, which is rounded out by local openers Daykeeper.

In the wake of the late ’90s  popularity of California stoner-rock bands like Kyuss and Fu Manchu, an unlikely cult of fuzz-rock sprang up in Sweden. The geographical similarities between the Palm Desert of southern California and the flat, arid desert of central Sweden led wild young Swedes to ape the origins of the “desert rock” scene and throw their own “generator parties.” Bands like Dozer, Lowrider and Spiritual Beggars would set up crusty old Orange and Hiwatt stacks under the breathtaking Aurora Borealis, using generators to power their all-night impromptu concerts.

Much like their Californian brethren, the Swedish longhairs would gather in the desert to imbibe and enjoy the fuzzed-out sounds of the new heavy rock bands, but with a nihilistic twist, born of that sense of ennui peculiar to the Scandinavian countries. While most would come only to party and enjoy the music, other, rougher types would roll out into the desert night in beat-up Volvo pickups and rattletrap Scanias, not to show off, but to do battle. Out of their heads on fly agaric or illicitly cooked Sandoz-recipe acid, roaring like their Viking forebears, the suicidally reckless would pair off in the flattest, widest part of the desert, and tear straight toward each other with complete abandon. Swedish steel would shriek and clatter as the lightweight pickups played real-life bumper cars, all to the soundtrack of groovy, undulating heavy rock. The casualty rate was surprisingly low (largely due to the sensible nature of Swedish auto manufacturers as well as the notoriously low engine power of the trucks) but the sight was at once both chilling and enthralling. 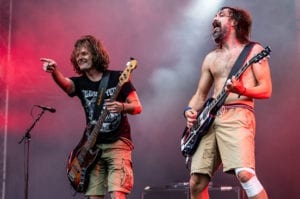 It was from this scene that Truckfighters was born. Legend has it that mainstays Ozo and Dango were rivals in the Örebro truckfighting scene. After one especially gruesome dustup, which left their trucks scorched and skeletonized with no clear winner, they chose to put their rivalry behind them and turn to music. They’ve transcended their roots  by road-dogging tirelessly and tenaciously for two decades, and their dogged roadwork has earned them a dedicated international following. Veteran drummer Pezo has returned to the band, and the trio show no signs of slowing down, taking to the road with the same tenacity that once fueled their death-defying vehicle battles.

Valley of the Sun hails from the cursed, fertile lands of Ohio. Their new album Old Gods is clearly imbued with the mystic spirit that underlies even the most polluted and corrupted Ohio ground. Their hometown of Cincinnati lies a scant 70 miles west of the Great Serpent Mound, a thousand-year-old-plus effigy of a serpent sculpted by a mysterious, advanced society on the edge of a 300 million year-old asteroid crater. It is an area of great spiritual power and ancient mystery, which leeches into Valley of the Sun’s music whether they intend it or not. Their psych-tinged heavy rock is greased with clean, melodic vocals that help the heavy pill go down with ease.

Daykeeper hail from the equally cursed and powerful Mississippi River Valley. Late-blooming children of a saturated subgenre, the band play dread-laden doom metal and thundering heavy rock delivered with snarling, distorted low end and a thousand-yard stare. Like the others, a bit of melody finds its way into Daykeeper’s vocals, even when intoning grim predictions of society’s collapse.

Doors for the spectacle will open at 7 PM. Daykeeper will play the first riff at 8. Admission is $18. Tickets are available at the door, as well as at Wake Brewing and Ragged Records in Rock Island and Co-Op Records in Moline. Digital tickets can be obtained at https://tickets.midwestix.com/event/truckfightersribco.

Corrections, comments and complaints can be sent to the author at Lthacher13@gmail.com. 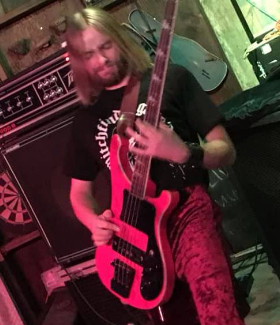