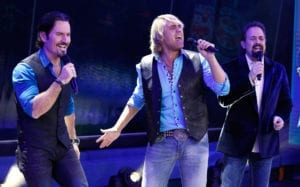 From Bruno Mars to Puccini, Marcus Collins, John Hagen and JC Fisher treat audiences to a unique blend of country, classical, Broadway and current pop music. They use breathtaking vocals, humor and a touch of cowboy charm to create an unforgettable live show.

It’s easy to see why The Texas Tenors are America’s favorite new tenors. Since their whirlwind debut 10 years ago on NBC’s America’s Got Talent, they have released 4 studio albums, 2 PBS specials, 4 DVDs, multiple singles and a children’s book that have earned them impressive recognition including 3 Emmy Awards, The Gelett Burgess Award for Excellence in Children’s Literature and the distinction of being Billboard Magazine’s 2017 #10 Classical Crossover Artist in the World.

The Texas Tenors proudly remain self-produced and managed with a commitment to quality, family entertainment for all ages. Whether it be stage, television, recording or multi-media projects, these “three friends with a dream” never forget their roots.

Marcus Collins and John Hagen, both from Iowa, are thrilled to be coming back to their home state to perform at the Adler Theatre on February 12.

Sean Leary
Sean Leary is an author, director, artist, musician, producer and entrepreneur who has been writing professionally since debuting at age 11 in the pages of the Comics Buyers Guide. An honors graduate of the University of Southern California masters program, he has written over 50 books including the best-sellers The Arimathean, Every Number is Lucky to Someone and We Are All Characters.
SeanLeary.com
See More Articles From Sean
Tagged: Adler TheaterAmerica's Got Talentdowntown DavenportRiverCenterTexas Tenors