Sean Leary May 17th, 2019 Things To Do, Music, Local, Fun, Events, Entertainment, Davenport Share:
Ready to take a time machine back to the ’90s? 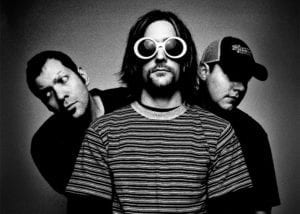 The Nirvana Experience is the ultimate Nirvana tribute band. Did you ever have the chance to see Nirvana live? Now you can see a band that offers an impressively similar stage show, down to their replica equipment and messy Cobain haircut, bringing the pinnacle of grunge music to the masses! The Nirvana Experience offers over 36 songs of the music that made Nirvana appeal to a generation. Including every song from Nevermind, as well as obscure tracks from Nirvana’s earlier days.

The Nirvana Experience made international news in 2015 with their fake Nirvana hit “Flaccid Bone” on TMZ, Spin, and many other media outlets. The song turned the heads of Nirvana’s bassist, Krist Novoselic, as well as Kurt Cobain’s widow, Courtney Love. The Nirvana Experience was selected to be on AXS TV’s “The World’s Greatest Tribute bands,” Season 3, in 2014.  Not only was the show sold out at the world famous Whiskey a Go-Go, in Hollywood, California, but the show had more request for tickets than any other band in the shows three years on air! They’ve also played the largest weekend biker rally, the Lonestar Rally in Galveston, Texas and performed at the JACK FM Throwback Festival, the nation’s biggest Tribute Festival, in Dallas, Texas!

Sean Leary
Sean Leary is an author, director, artist, musician, producer and entrepreneur who has been writing professionally since debuting at age 11 in the pages of the Comics Buyers Guide. An honors graduate of the University of Southern California masters program, he has written over 50 books including the best-sellers The Arimathean, Every Number is Lucky to Someone and We Are All Characters.
See More Articles From Sean Leary
Tagged: gaminglocal casinoslocal concertsNirvanaNirvana ExperienceRhythm City Casino