The Speakeasy in downtown Rock Island is celebrating Cinco de Mayo a day early with the debut of Los Improviachis!  This hilarious improv comedy show comes direct from Chicago and will be making their Speakeasy debut on May 4! 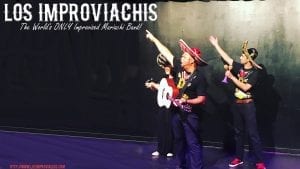 LOS IMPROVIACHIS  brings to the stage improvised music, dance and comedic scenes in the style and grace of the time-honored tradition of the mariachi. With lots of audience participation, this show is always a fun, hilarious fiesta!

“We’re excited to welcome this show to The Speakeasy,” said Brett Hitchcock, director of audience development. “Audiences have really enjoyed the other comedy shows we’ve brought in from Chicago like ‘Pimprov’ and ‘Love Me Tinder.’ We know the audience will enjoy this just as much!”

Sean Leary
Sean Leary is an author, director, artist, musician, producer and entrepreneur who has been writing professionally since debuting at age 11 in the pages of the Comics Buyers Guide. An honors graduate of the University of Southern California masters program, he has written over 50 books including the best-sellers The Arimathean, Every Number is Lucky to Someone and We Are All Characters.
See More Articles From Sean Leary
Tagged: Brett HitchcockChicago Improv FestivalCinco de MayoCirca '21Los ImproviachisSpeakeasy