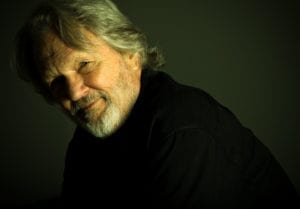 Heralded as an artist’s artist, the Country Music Hall of Fame member and three-time GRAMMY winner has recorded 30 albums and spent three decades performing concerts all over the world.  Kristofferson is a winner of the prestigious Johnny Mercer Award from the Songwriter Hall of Fame, and has been honored with the American Veteran’s Association’s “Veteran of the Year Award.”  Additionally, he has received the Johnny Cash Visionary Award from Country Music Television and in 2009 BMI lauded Kristofferson with the Icon Award.  He received the Frances Preston Music Industry Award from the T.J. Martell Foundation in March, 2012.  In 2014, Kristofferson was honored with a GRAMMY Lifetime Achievement Award and the PEN Song Lyrics of Literary Excellence Award.

His renown as a songwriter triggered Kristofferson’s successful career as a performer and that, in turn, brought him to the attention of Hollywood.  Kristofferson has acted in more than 70 films.  In 1977 He won a Golden Globe for Best Actor in “A Star Is Born.”  He’s appeared in cult favorites including the “Blade” trilogy, “Lone Star,” “A Soldier’s Daughter Never Cries,” “Alice Doesn’t Live Here Anymore,” “Blume In Love,” “Cisco Pike,” and “Pat Garrett and Billy the Kid.”  Recent films include “Fast Food Nation,” “Dreamer: Inspired By A True Story,” “The Jacket,” “Silver City,” “He’s Just Not That In To You,” and “Dolphin Tale.”

Kristofferson has released several high watermarks including the increasingly intimate A Moment of Forever (1995), The Austin Sessions (1999) and This Old Road (2006), and he produced some of his finest work with the deeply personal Closer to the Bone(2009) and Feeling Mortal (2013).

Sean Leary
Sean Leary is an author, director, artist, musician, producer and entrepreneur who has been writing professionally since debuting at age 11 in the pages of the Comics Buyers Guide. An honors graduate of the University of Southern California masters program, he has written over 50 books including the best-sellers The Arimathean, Every Number is Lucky to Someone and We Are All Characters.
SeanLeary.com
See More Articles From Sean
Tagged: Adler Theaterdowntown DavenportKris Kristofferson and the StrangersRiverCenter