An Assumption High School alum whose father was executive director of Mississippi Valley Fair for decades, Salter is penning the biopic with television producer Craig Turk (“The Good Wife,” “FBI”). The film is being made with support from McCain’s family. His widow, Cindy McCain, will serve as an executive producer.

Salter, a graduate of Davenport Assumption, was a longtime confidant, speechwriter and co-author for U.S. Sen. John McCain of Arizona.

“John’s story is one of incredible heroism, of serving causes greater than his own self-interest,” Cindy McCain said in a statement, according to Variety. “There is no better time to tell it. I’m excited to share his life and legacy, and know this film will be a tremendous inspiration to people all over the world.”

Turk, who is also producing with Greg Silverman under his Stampede Ventures banner, served as chief legal counsel to McCain’s 2000 presidential campaign.

“Working for John McCain was one of the great honors of my professional life,” Turk said. “Having the opportunity to bring his life to the screen — and to do it with people I admire as much as Greg, Mark, and Cindy — is an incredible privilege.”

Salter noted in the Variety piece: “I’ve been helping to tell John McCain’s story for three decades. It will be a special privilege to work with Craig, Greg and the McCain family to tell it in film.”

Salter, 65, first entered politics as a speechwriter for U.S. Ambassador to the UN Jeane Kirkpatrick and later attended Georgetown University. He met McCain at the 1988 Republican National Convention, and ultimately wrote seven books on him, receiving front-cover credit for each. During the 2008 presidential campaign, he was an intimate collaborator, advisor, and confidant. He was also McCain’s primary speechwriter and served as his chief of staff.

According to Deadline Hollywood, Stampede Ventures plans to turn the Arizona Senator’s sprawling life story into a feature film. They optioned rights to three books by Salter: The Luckiest Man: Life With John McCain, Faith of My Fathers and Worth the Fighting For. 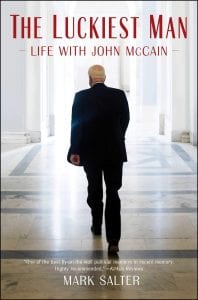 Mark Salter’s “The Luckiest Man” was published in October 2020.

“Could there be a bigger contrast in how two people exited public life than the way John McCain left it and the way that Donald Trump is doing it now?” Salter asked in the Deadline piece. “It’s just worlds and universes apart.”

The son and grandson of four-star generals, McCain famously served in Vietnam and was shot down in 1967 during a bombing run over the North Vietnamese capital of Hanoi. Captured and held as a prisoner of war for five years, the future U.S. Sen was brutally tortured when he refused to be used for propaganda and declined an offer to be set free, unless his fellow POWs were also allowed to leave also. Trump, as a young man avoided Vietnam with a doctor’s note citing bone spurs, disparaged McCain being called an American hero, because he was captured by the enemy.

McCain first served in the U.S. House from 1983 to 1987, when he became a U.S. Senator – a position he held until his death at 81 in August 2018. He was the Republican candidate for president in 2008. On Aug. 24, 2018, five days before his 82nd birthday, McCain’s family announced that he would no longer receive treatment for his brain cancer and he died the next day.

Salter published The Luckiest Man this past October.

“It’s an unprecedented time we’re in and this is the memory of a guy we witnessed who put America first,” Salter told Deadline. “He was funny, profane, with all these dualities to his nature. He was romantic and cynical, an exhilarating guy to be around. He would be the first to tell you that he screwed up a lot in public and private life, but when the real crunch moments came, and his political career was where most got to see this, he would put the country ahead of himself.

“You never saw that more than in the last years of his life. Where did that begin and what informed those choices? It’s his story in Vietnam. Fifth from the bottom of the class in the Naval Academy, bemoaning to a good friend in the Navy he wasn’t going to get anywhere in the Navy, he didn’t think.”

Salter was one of McCain’s closest and most trusted confidants, friends, and political advisors, according to a summary of “The Luckiest Man” at simonandschuster.com, the book publisher. 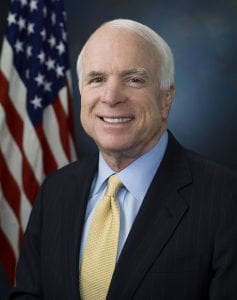 “More so than almost anyone outside of McCain’s immediate family, Mark Salter had unparalleled access to and served to influence the Senator’s thoughts and actions, cowriting seven books with him and acting as a valued confidant,” the synopsis says. “Now, in The Luckiest Man, Salter draws on the storied facets of McCain’s early biography as well as the later-in-life political philosophy for which the nation knew and loved him, delivering an intimate and comprehensive account of McCain’s life and philosophy.

“Salter covers all the major events of McCain’s life—his peripatetic childhood, his naval service—but introduces, too, aspects of the man that the public rarely saw and hardly knew. Woven throughout this narrative is also the story of Salter and McCain’s close relationship, including how they met, and why their friendship stood the test of time in a political world known for its fickle personalities and frail bonds.

“Through Salter’s revealing portrayal of one of our country’s finest public servants, McCain emerges as both the man we knew him to be and also someone entirely new. Glimpses of his restlessness, his curiosity, his courage, and sentimentality are rendered with sensitivity and care—as only Mark Salter could provide. The capstone to Salter’s intimate and decades-spanning time with the Senator, The Luckiest Man is the authoritative last word on the stories McCain was too modest to tell himself and an influential life not soon to be forgotten.”

A Wall Street Journal review of the book called it a “moving and lucidly written memoir,” which emphasizes the great man’s optimism and gratitude. “Write how lucky I am,” he tells Salter after it becomes clear he has lost the 2008 presidential election to Barack Obama; “nobody has to feel sorry for me.” Lucky, sure. But the sense of tragedy remains, the review said.

“Mr. Salter’s admiration for his old boss is profound, but he is aware, too, of McCain’s complexity. The senator had a ferocious temper, at one point nearly coming to blows with Ted Kennedy on the Senate floor. But he was also an irrepressible wisecracker. I was reminded of his answer to North Vietnamese interrogators who asked McCain for the names of the other men in his squadron. He gave them the names of the Green Bay Packers’ offensive line. “

Salter’s other books with McCain include The Restless Wave, Faith of My Fathers, Worth the Fighting For, Why Courage Matters, Character Is Destiny, Hard Call, and Thirteen Soldiers. He served on Senator McCain’s staff for 18 years.

Jonathan Turner
Jonathan Turner has been covering the Quad-Cities arts scene for 25 years, first as a reporter with the Dispatch and Rock Island Argus, and then as a reporter with the Quad City Times. Jonathan is also an accomplished actor and musician who has been seen frequently on local theater stages, including the Bucktown Revue and Black Box Theatre.
See More Articles From Jonathan Turner
Tagged: craig salterfaith of my fathersJohn McCainmark salterstampede picturesthe luckiest man: life with john mccainworth the fighting for