And Just Before Election Day, The Video You Deserve Is…

It’s a day before Election Day.

And so, the Video You Deserve is, of course, “Election Day.”

Back in 1985, Duran Duran were undeniably the biggest band in the world. They’d had multiplatinum success worldwide with “Rio” and its trio of hits in “Hungry Like The Wolf,” “Rio” and “Save A Prayer,” and followed that up a year later in 1984 with “Seven And The Ragged Tiger,” which sold over 10 million copies worldwide and spawned three top ten hits worldwide in “Union of the Snake,” “New Moon on Monday,” and, the massive number one smash, “The Reflex.”

Then on top of that, they had another huge number one worldwide triumph in the theme for the Bond film “A View to A Kill.”

Soaring high as the biggest band on the planet, they decided to take a hiatus from each other, and split into two camps to do separate projects, both of which were likewise tremendously successful.

Guitarist Andy Taylor and bassist John Taylor formed the Power Station with drummer Tony Thompson and singer Robert Palmer, and they would have a handful of hits with “Some Like It Hot,” “Get It On” and “Communication.”

And the remaining members of Duran — vocalist Simon LeBon, keyboardist Nick Rhodes, and drummer Roger Taylor — would go on to record the album that’s generally acknowledged as what would’ve been the next Duran Duran album had the band remained intact. That 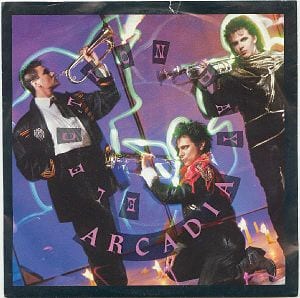 album? “So Red The Rose,” by the LeBon, Rhodes, Taylor trio, which would dub itself Arcadia.

The first single off “So Red” was “Election Day,” released by Parlophone Records in October 1985 and subsequently hit the Top 10 on both sides of the Atlantic, peaking at No. 5 in the US and No. 7 in the UK. The single reached the Top 5 in New Zealand and Ireland, but was especially popular in Italy, where it topped the chart for seven consecutive weeks. Along with the Arcadia members, “Election Day” features Grace Jones on vocals and speech segments.

The video was exceptionally popular on MTV, which had given constant airplay to Duran’s videos. Inspired by Jean Cocteau‘s 1946 film, La Belle et la Bête — the video was shot in and around Paris in late September 1985, and featured a short cameo appearance by underground author William S. Burroughs.

So, whoever you’re voting for, or have voted for, we can all agree that this is a pretty awesome video and song. And here it is. “Election Day,” by Arcadia. The Video You Deserve…

Sean Leary
Sean Leary is an author, director, artist, musician, producer and entrepreneur who has been writing professionally since debuting at age 11 in the pages of the Comics Buyers Guide. An honors graduate of the University of Southern California masters program, he has written over 50 books including the best-sellers The Arimathean, Every Number is Lucky to Someone and We Are All Characters.
See More Articles From Sean Leary
Tagged: andy taylorarcadiaelection dayjohn taylornick rhodesRoger Taylorsimon lebonso red the rosevideo you deserve