Home » Columns » Tristan Tapscott » Ever see 50 mics drop at once? Watch ‘The Shape of Water’

Ever see 50 mics drop at once? Watch ‘The Shape of Water’ 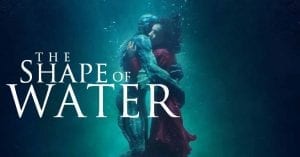 Ever see 50 mics drop at once? Watch “The Shape of Water” and you will.

Guillermo del Toro drops them all and probably secures his Oscar win. The man is genius. Period. I’ve always know that. You’ve always known that. After all, Pan’s Labryinth is one of the beautiful and important films of all time. But this is different. Very different… in every way. On paper, this Amazon monster-romance-horror-fantasy-heist (yes, it’s all those and more) seems an unlikely smash hit but on the screen it sizzles and inspires.

“The Shape of Water” is the year’s perfect marriage of the senses. The color palettes used by del Toro and Production Designer, Paul D. Austerberry, are stunning as is the breathtaking photography by Dan Laustsen, and the trio creates the most visually appealing film of the year (and maybe of the last few years). That coupled with the incredibly winning score by Alexandre Desplat (a recent Golden Globe winner), it creates a unbelievably beautiful film. Even now, 12 hours after my first viewing (there will be more), I’m still kind of in awe over how good “The Shape of Water” actually is. It’s old school Hollywood at its finest.

Simply put (as if that is possible), “The Shape of Water” is a beautiful tale of love and devotion and how far one will trek to forego loneliness with political undertones. Odd, right? Yes,  It is bizarre. Really, really bizarre. You haven’t seen anything like it and you won’t be prepared to how it hits you.

At the center of this fairy tale is the unforgettable Sally Hawkins as Elisa, a mute and music lover who loves above a movie house, who makes a living cleaning a secret Government facility in Baltimore in the 1960’s. Hawkins delivers a beautifully nuanced and touching performance without saying a word opposite an “Asset” (soulfully played by Doug Jones) housed in a tank within the complex. As her fellow cleaning lady and voice piece at the facility, Velda, Octavia Spencer turns in a very a-typical Spencer performance that provides for much of the comedic relief and logic to Elisa’s ultra fantastical and whimsical nature. Playing their high octane and vicious boss, Strickland, Michael Shannon is in top form and gives what I think is one of his top five performances of his career, especially opposite strong character actor Michael Stuhlbarg, the symbol of compassion, despite having his own Russian agenda. What unfolds is tricky, somewhat elaborate, at times rushed but always nuanced, symbolic and important.

Giving his career best, Richard Jenkins plays Giles, Elisa’s best friend and closeted gay artist, and he turns in a sterling and STELLAR performance. It’s quiet and subtle but somehow speaks volumes of heartbreak and longing. Jenkins is so real you might catch yourself forgetting the film or the fact that you are watching the guy who’s played everyone’s dad since the early 2000’s. He gives the type of performance that will inspire for years to come. It’s easy to see why Jenkins has been nominated for every minor and major supporting actor award and why he just might upset Rockwell and Dafoe at the Oscars.

I don’t want to overplay how good it is because it is odd and if you can’t let go of logic, you will absolutely loath it. If you have a ready imagination and ability to get immersed in a fantasy, this will totally be your thing. Minor plot quibbles and a few of Shannon’s disgusting actions aside, it’s a near pitch perfect film. It’s epic, it’s touching, it’s stressful, it’s funny, and applause worthy. In classic del Toro fashion, there is nothing else like it.

Tristan Tapscott
Tristan Layne Tapscott has been dubbed the “Quad Cities’ P.T. Barnum” and although the person who initially said it meant it as an insult, he happily accepts the title.
See More Articles From Tristan Tapscott
Tagged: Academy AwardsOscar nominationsThe Shape of WaterTristan Tapscott