Home › Columns › Tess Abney › All You Need to Know This St. Patrick’s Day

All You Need to Know This St. Patrick’s Day

When we think about St. Patrick’s Day, we imagine parades, corned beef and cabbage, clovers and of course- GREEN BEER! But what is the real story behind this fun-filled holiday?

First fun fact? St. Patrick wasn’t even Irish. He was born in Roman Britain sometime in the 5th century (the actual date has been greatly disputed). His given name at birth was Maewyn Succat. At age 16, Irish pirates invaded his family’s home. Maewyn was kidnapped, taken to Ireland and enslaved. Those green beers are already sounding more refreshing, right? 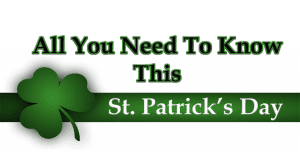 The young man that is now known as St. Patrick eventually escaped his master’s grasp, traveled 200 miles to a ship port, convinced a captain to let him board his ship (I bet that guy ended up being pretty proud of his decision) and walked for 28 days until he arrived back at home.

Maewyn’s father and grandfather were both involved in the church. His father, Calpurnius, was a decurion and deacon. His grandfather, Potitus, was a priest. While Maewyn had no initial intentions of following his father or grandfather’s footsteps, the combination of those six years in slavery and the journey back to his home played a major part in changing that mindset. He decided to study Christianity, after all.

The now-free, and religious, Maewyn felt compelled to return to Ireland to liberate the Irish people that once kept him captive. Pope Celestine granted Maewyn his request and then named him Patritius (Patrick), “father of his people.” While the evidence is circumstantial, it is said that St. Patrick returned to Ireland through the same port he escaped from. Talk about stickin’ it to the man, am I right?

The effect St. Patrick had on Ireland is obvious by the fact the anniversary of his death (March 17) is still celebrated as a national holiday to this day. While the holiday has gone through its changes throughout the centuries, one thing holds true. Maewyn was one awesome dude.

Because St. Patrick’s Day occurs during lent, church officials in Ireland decided to give their patrons the day off from abstinence in the mid-1600’s. This decision ultimately led to the more festive celebrations than were originally expected. Because of the holiday’s religious roots, pubs were actually closed on St. Patrick’s Day in Ireland until the 1970’s. It was tradition in Ireland to attend mass as a family and then come home to a feast (not corned beef) to honor St. Patrick. A little different than what we know now, here in the United States.

The first documented St. Patrick’s Day Parade in the U.S. was in 1762, fourteen years before the signing of the Declaration of Independence. When Irish immigrants flooded the United States, during the Great Potato Famine in 1845, they found themselves pretty alienated. Their religious beliefs and unfamiliar accents led to some intense discrimination. Irish immigrants started banding together and creating Irish society groups. Throughout the late 1800’s, these societies combined efforts to create the St. Patrick’s Day Parade in New York that we now know. This is the world’s oldest civilian parade and the largest in the United States. In the beginning it was frowned upon and mocked by others. Well, that didn’t last!

Americans started realizing the political potential in the Irish and decided to capitalize on the holiday to help win over their votes. Obviously, they did NOT regret that decision. As Irish immigrants started spreading throughout the country, St. Patrick’s Day celebrations continued to grow as well!

Now we enjoy green rivers, fun-filled parades, concerts and an overall sense of celebration and excitement. St. Patrick’s Day has expanded throughout the world to St. Patrick’s Weekend and St. Patrick’s Week. And why not? He may not have been born in Ireland, but Maewyn Succat most definitely played a very important role in what makes the Irish who they are, today.

So, this St. Patrick’s Day (or Maewyn Day, if you’d like) when you’re enjoying a carefree time with your friends and family, remember the man who put all biases and ill-feelings to the side and saw his hardships he had endured for the good of others as a positive thing, not a punishment.

Tess Abney
Tess Abney was born and raised in the Quad Cities. Her passion for writing and entertainment was apparent at a very young age. Whether it is sharing local events and businesses with readers or sharing her thoughts on life, she finds comfort in the way words can bring people together.
See More Articles From Tess Abney
Tagged: celebrationscorned beef and cabbagefun factsgreen beerholidaysHot SpringsIrelandIrishleprechaunsMaewyn SuccatNew YorkQuad CitiesSaint PatrickshamrockSt. PatrickSt. Patrick’s DayTess Abney