Ryan Franks November 19th, 2018 Ryan Franks Share:
On Saturday October 20th, Saint Ambrose University Library hosted a “Comics Gaming Entertainment” event (https://libguides.sau.edu/c.php?g=838240&p=5987350).
I had friends setting up at the event, so I decided I’d pop over and see what was on offer. I’ve never been to Saint Ambrose before, even though a friend of mine spent his college years there. So after finding the library, mostly through luck. I walked into the Saint Ambrose library to see what was on offer that morning. 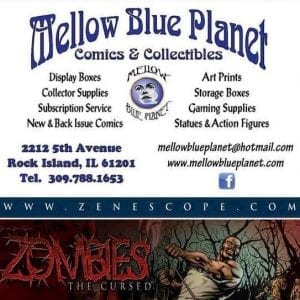 After walking through the front doors the first thing I noticed was five tables set up in the main hallway. Starting from my right was the registration table for the costume contest and, I guess you’d call it a lottery. They had a cork board, or something like it, poked with holes with lollipops sticking out of them. You won if the lollipop you pulled from the board had a marked stick. Which I did. So, I got to pick an item from the prize table. The problem was that most of the stuff they had on offer was just a bunch of random college paraphernalia with the Saint Ambrose logo and or mascot slapped on it. The one thing that jumped out at me was Fred Van Lente’s The Con Artist, his novel about a comic book artist accused of killing a rival at San Diego Comic Con. The problem is that I already own The Con Artist, don’t need a second copy and hoped that if someone else won they’d take the novel so that others can enjoy it. I haven’t finished it yet, but I’m a big fan of Van Lente’s comic book work. I especially recommend his Comic Book History of Comics; his history of the comic book medium done as a comic book.
Next to the registration table was the Derry Public Radio podcast, which is a podcast devoted to the works of Stephen King. I’ve read some of King’s work, but I wouldn’t call myself a fan. Next up was Midnight Mausoleum, which was one of the big draws for me. I was behind on a few of their DVD releases, so I was glad to see them and catch up with releases. Finally there was Mellow Blue Planet, my personal go to comic book store of the Quad Cities.
Next to the Mellow Blue table was a sign pointing down a row of book shelves where more tables had been placed. Cookies by Angie, selling, you guessed it, cupcakes. No, it was cookies. Next to them was What’s That Funk, a local entertainment production company, selling copies of their comic Battle of the Xybermorphs and talking about the Planet Funk Con they put on in June and talking up the convention they’re planning for next year. Next to them was the Ambrose role-playing game club and on the opposite end of the room was PARADIGM, a local VR gaming group. Next to the VR group was a woman with some kind of crafts table. I’m not into crafts, so I didn’t stop to see what was on offer.
The SAU website shows several more vendors, but I never saw them at the convention. I was told after the fact that they were behind the registration table and down a row of bookshelves, but I don’t remember seeing a sign for any of them, so I didn’t go looking. Another problem they had was that I didn’t see many people there. One of the organizers even joked that it’s a college so the students aren’t getting up until noon, which makes me wonder why they didn’t start things at noon. If that wasn’t an option then I question why they only had the event for four hours. Given the statement about sleeping habits it might make sense to have the event for longer then four hours to allow people the time to check out this event. I also heard that once things where over they wanted all the vendors out right quick. Easy for some vendors, not so for others.
I hope Ambrose tries this again. I want this to be a learning experience even if the event itself was underwhelming. I’d love to see the other colleges in the area try something like this. You sometimes hear them talk about popping the bubble college campus’ have with the communities and events like this are a good way of doing that.

Ryan Franks
Ryan Franks has been into comics for as long as he can remember. He first started collecting back in 1993.It didn't become an obsession until 2009, but still remains one...
Tagged: comicsFred Van LentegamingSaint Ambrose UniversityThe Con Artist