If you’re at the Food Truck Fight on LeClaire’s levee tonight, or the Saturday Farmers Market at the Davenport Freight House, there’s a good chance you’ll see a bright blue and green newcomer. 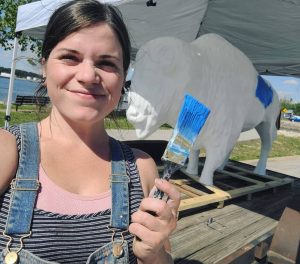 She has volunteered with Living Lands & Waters over the years, the environmental nonprofit led by Chad Pregracke, who in March announced the Bison Bridge plan. Dawn’s boyfriend Cody Breecher has been their operations manager since December.

“So I’ve been involved with them, and I’ve actually gone out of town and done some cleanups,” she said Friday. “They just kind of asked me ‘cause I already kind of do that thing. I do live painting and I’m already on their payroll.”

Of Breecher, Dawn said: “He is a mechanical guru and I come to make everything pretty again. Next summer I’ll be painting their tugboats and they just bought a bunch of warehouses by The Rust Belt, the old McLaughlin warehouses, and we’re going to be doing large murals on those here when they get some more renovations done.” 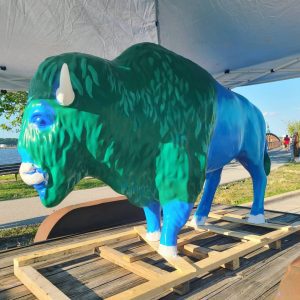 Buddy Bison will be at the Food Truck Fight in LeClaire tonight (Friday, June 18), and every Saturday this summer at the Freight House Farmers Market, Davenport.

LL&W will use warehouses to convert the big blue 55-gallon drums they take from rivers, into plastic pallets, Dawn said. Her murals will give the area “a really fun vibe; they’re going to redo all the landscaping around that building and incorporate the bike path and trying to make that downtown East Moline a really nice place, to be real cool.”

Pregracke’s long-term vision (unveiled to the public March 18) is to turn the Bison Bridge and the acreage on either side of the Mississippi River adjacent to the bridge into a new National Park. Visitors will have the chance to learn about the history of the prairie, native wildlife, and the historical significance of the river.

With over 42,000 cars a day traveling over the Mississippi on I-80, the Bison Bridge will attract locals and visitors alike for the chance to experience all the river and the region have to offer, according to project supporters.

Completed in 1966, the four-lane Fred Schwengel Memorial Bridge connects the Q-C between LeClaire, Iowa, and Rapids City, Ill. In 2020, the Illinois Department of Transportation began a preliminary study to replace the bridge.

After forming Living Lands & Waters in 1998, Pregracke has had this bridge idea for 20 years, to make this an iconic attraction for the region. LL&W has been working on prairie restoration next to the bridge on the Illinois side.

The project comes as the Illinois DOT is studying the future of the 55-year-old infrastructure and preparing to make decisions about the location and design of a new I-80 replacement bridge. Bison Bridge plans to have the current westbound lanes as a forested, vegetation-filled bison refuge – the largest wildlife crossing in the world — and the other side as a pedestrian-bike crossing, with many amenities. 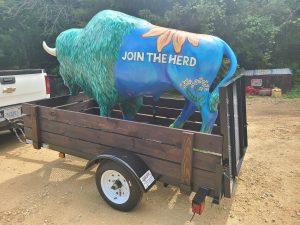 Buddy Bison in his trailer, ready to make appearances around the Q-C.

The nonprofit Bison Bridge Foundation has gathered close to 30,000 signatures toward a goal of 50,000 to show IDOT public support for the project. The fiberglass bison was donated by a company in St. Paul, Minn., where LL&W recently did a cleanup early this month, for the Bison Bridge Project, Dawn said. Pregracke was inspired by the tradition of painted horses in Louisville, in honor of the Kentucky Derby, she said.

“He just thought that was so cool. And he’s like, let’s get bison, right?” Dawn said Friday. Louisville’s Sidewalk Derby has graced the streets of Louisville with more than 500 vibrantly decorated fiberglass statues since 2004 to help beautify the community.

Buddy Bison will be brought to events throughout the community, accompanied by LL&W interns to explain Bison Bridge and answer questions about the project, she said.

“A lot of people are confused. They think that Chad is asking for money or other things like that and he’s not,” Dawn said. “He’s already got funding for the whole project. We just need to show the Department of Transportation that we 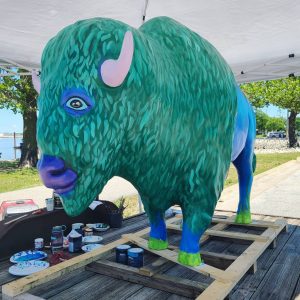 Buddy Bison is a fiberglass bison statue from a company in St. Paul, Minn.

have the support from the community and it’s something that people want.”

The current estimate is that the entire project, including maintenance, will cost around $20 million. However, because this will be privately funded, there will be no public tax increase, according to https://bisonbridge.org/faq.

Of the unique bridge plan, Dawn said: “That’s badass. I hope it comes to fruition. I’m an avid bicyclist. And so to have that bridge connect over to the Iowa side would be such a big deal for the Quad-Cities,” she said.

“To see grass and everything across the bridge, over the river — I’ve never seen really anything like that,” she said. “They would keep it a small herd and they’ve got plans for how they would they have a specialist who would take care of them. So, right, just to be with that rest of wildlife and also enjoying the park, the river in nature would just be a full circle experience.

“It would be very cool if we got the national park system involved and we could landmark it, and 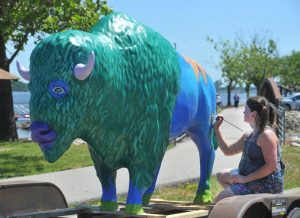 we’d be on the map with this bridge — just to kind of make our hometown a little bit more special, that would be totally worthwhile.”

Buddy Bison is the name of the National Park Trust mascot because of its century-long importance to the nation, Ivan Levin, NPT director of strategic partnerships, said in April.

“The bison is the national mammal of the United States, and has been an icon of the National Park Service and Department of Interior for a long time. It was chosen really for that reason – its size, its power, what it means to the country.”

Buddy Bison has “been part of our organization for a long time now,” Levin said. “He is our beloved mascot, who really represents programming.

“Underneath our Buddy Bison and youth programs, we really engage youth, underserved Title I schools across the country and engaging them in meaningful park experiences while also highlighting the wellness benefits of outdoor recreation, the importance of stewardship of our parks and really showing how parks can be used as classrooms.”

Painting the town for three years

Dawn – who goes by her first two given names – has loved art since she was a child and excelled at art class over everything, she wrote in her online bio.

She participated in many Figge Art Museum showings through school and worked for the Quad City Arts mural program one summer; went 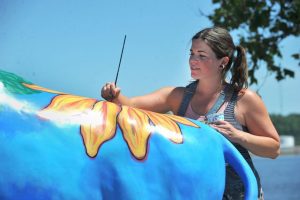 Dawn painting Buddy Bison, which will be used to promote the Bison Bridge project.

to a summer pre-college at the Kansas City Art Institute and won the Brand Boeshaar Art Scholarship at the Figge her senior year of high school.

“I had the best art teacher at Moline High, Nick DiGioia, and I will forever hold his memory and teachings in my heart,” she wrote.

Dawn attended the Milwaukee Institute of Art & Design, but quickly realized she wasn’t ready financially or maturity-wise to finish at that age.

“I have many regrets for not being stronger and finishing, but it was very challenging at the time with very little support and dealing with an anxiety disorder,” she wrote. “I’ve considered going back to school, but I decided to explore the world instead. I headed west and spent a few years living in Washington, Oregon and California. 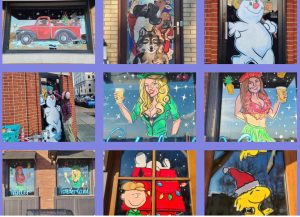 A sample of painted windows by Atlanta Dawn.

tackle my dreams and that the small steps towards your goals are the most important part to achieving them.”

“Witnessing the artistic talents of other amazing creative people, I realized I could provide similar services for my hometown,” her bio says. Dawn moved back to the Quad-Cities in summer 2019, and has done murals and window paintings all over the bi-state region  — including at the Rust Belt, East Moline, Unimpaired Dry Bar in Davenport, Yabba Dabbas in Rock Island, Front Street Brewery and Stombox Brewing in Davenport, many other downtown Davenport locations and Blue Grass, Iowa.

“Loving life and helping small businesses in my community with an arrangement of artistic services from window painting to mural art, custom sign work and graphic design,” her bio says. “I have a thirst to learn and I love watching my progression as I continue to create,” she wrote.

Of all her varied art projects, Dawn said she doesn’t have a favorite medium.

“I think just being able to create, I guess my favorite projects would be the ones that clients just let me have fun and let me choose,” she said. “A lot of times people, especially like they want their logo or they want  very specific things they want done.”

Over this past Easter, Thirsty’s on Third in Davenport hired her to paint something fun and spring-like on their windows, and she did an 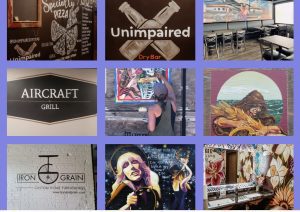 A variety of painted murals by Dawn, a 28-year-old Moline High alum.

“I took the flowers with the places and made it super fun and whimsical,” Dawn said. She doesn’t mind that the window paintings are temporary, compared to building murals.  “I love doing the windows, because it keeps me on coming in, which allows me to keep doing art. So, 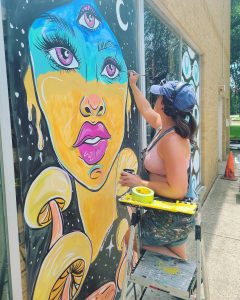 Dawn working on a mural for Yabba Dabbas glass shop in Rock Island.

Dawn and her boyfriend are expecting their first child, daughter Violet, on Aug. 6. It’s been a challenge to paint in the recent heat while 33 weeks pregnant, she said.

“I just wake up really early in the morning when it’s cold or I’ll just start later in the day and get it done, to kind of avoid that midday heat wave,” Dawn said.

Her colorful Buddy Bison says “Join the Herd” on him, encouraging people to sign for the project, including literally on the statue. The plan was featured June 11 in an ABC News segment. Quad Cities Chamber CEO Paul Rumler told ABC News that the idea “is crazy enough to be great.” He said his organization believes the bridge would put the Q-C on the map both nationally and internationally. “It helps set a unique and differentiating message for our region that will help tell the world that we can think big, be creative and put this really cool project together,” he said.

To see more of Dawn’s work and for more information, visit www.atlantadawn.art.