The Class of 2021 Inductees for the 67th Annual O’Reilly Auto Parts World Series of Drag Racing Hall of Fame are:

A man with over 30-plus years of experience, Rick Jones has over 35 national-event wins and four world championships. Starting with his first car, the famed 1969 “Orange Crush” Camaro, Jones brought that over to Cordova International Raceway in 1978. He used his knowledge of cars to create RJ Race Cars and Quarter-Max Chassis. The Quarter-Max brand has helped provide for some of the fastest classes out there, ranging from Pro Stock to Top Sportsman.

Jones has created a performance parts empire thanks to his love for drag racing. From providing for his first customer, bracket racer Greg Couch, to his support of Radial v. The World, Jones’ legacy has reached all over and will be recognized by Cordova.

A true Cordova mainstay, Pat Richardson started racing around 1968. Thanks to his powerful 1967 Camaro, Richardson became track champion of Cordova International Raceway in 1976. He used that momentum to race throughout the Midwest. Known for door-open dry hops and running the Super Gas and Super Comp series, Richardson added another trophy to his collection with a World Series win in 1982.

Richardson continues to race while making it a true family affair. His daughter, Chrissy, drives the Pat-built 1966 Pontiac. This car has a 25.1 chassis and is certified to run six seconds in the quarter-mile.

Bill Lindle has been around since Cordova International Raceway opened its doors. A taste of what was to come, Lindle was able to pull up behind a green and white ’54 Olds during the early years of CIR. The owner of said vehicle? Arnie “The Farmer” Beswick. After that, he drove a ’59 Chevy that he used when racing in Unit Stock. 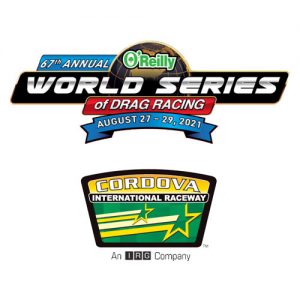 Following a brief break, Lindle returned in full force, earning a World Series win in 1995. A true family man, Lindle passed on his love for drag racing to his sons, Scott, Tom, Jerry, and his daughter Joni, who made it their priority to start bracket racing at a young age. Lindle’s recognizable ’62 409 red Chevrolet made him a fan favorite, and his commitment to the track has made him a deserving member of this year’s Hall of Fame class.

A true pioneer, Larry “The Moline Mopar Muscle Man” Griffith started with a ’51 Plymouth, but really came into his own with a ’62 Chevy with a 327. The fastest MPH that Chevy ever achieved is still etched into his mind; 91 MPH. Like others, Larry was amazed by the speed of Arnie Beswick, who he would beat down the track in the 1980s.

Earning help and praise from John Farconis of “Chi-Town Hustler” fame, Griffith bought an A/Stock machine that went on to be a record holder in 1964. Griffith would continue to race over the decades. In 2014, he raced serial No. 2 during the Dodge Drag Pack Challenge. Cordova International Raceway was a place he proudly called home. A World Series-winning, UDRA Champion, Griffith co-founded his own Auto Shop in 1971.

Online general admission tickets for the 67th Annual O’Reilly Auto Parts World Series of Drag Racing start at $35 for Friday, $45 Saturday, and $15 Sunday. Tickets for children ages 6-12 are $15 for Friday, $15 for Saturday, and $5 for Sunday. A three-day “Super Pass” ticket for the entire weekend is $80 for adults and $25 for children 6-12.  You can grab tickets through the following link.