Starting a new business is always a risky, challenging proposition. Starting one during a pandemic and a holiday season adds another level of worry. 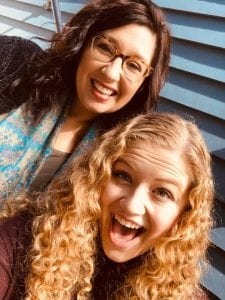 coach) are extending their brand to the new Double Threat Studios.

“We aim to encourage boldness, confidence, creativity, and community through performance,” the women posted on Facebook. “Our offerings will include private voice lessons, private tap lessons, and theatrical programming for the QC community.”

“The amount of work that taking on a studio requires, I don’t think either of us is scared of it,” DeLacy said in a Monday interview. “We’ve loaded our schedule so much anyways. We’re used to putting in really long days. When I’m in the swing of high school, spring musical season, it’s not uncommon for me to be working at 6 to 8 different places. It’s busy, but we’re used to it at this point. It’s gonna be a different kind of busy.”

The women aren’t worried about adding stress to an already stressful holiday season. Warren said they’ve done a lot of the hard work, in

getting the lease agreement worked out, and she led the creation of their logos and website, doublethreatstudios.com.

“Now that’s done, we get to focus on the fun stuff now,” she said. They already planned to take a few weeks off lessons around Christmas.

“We just decided that we are capable, and anywhere we could do the work, we decided to do the work ourselves,” Warren said. “It was definitely trial and error.”

“There are also so many resources out there and we needed to learn to code a little bit for the website, since neither of us had done that before, and Megan found a great resource,” DeLacy said. “We’re both go-getters, so that’s been really fun too.”

Their free “Double Threat” podcast – which debuted in April 2020 on Apple, Spotify and SoundCloud – averages about 90 minutes, with a new episode each Monday (Nov. 30 was number 31). The enthusiastic women each talk about a musical according to a theme for the week (like shows known for dance), and toward the end offer a “mixtape” of discussing songs from three other shows that fit the theme. Then they ask listeners to vote for which musical they prefer.

DeLacy and Warren have been closely connected with Moline’s Spotlight Theatre, and have offered dance and vocal lessons from there over the past year. 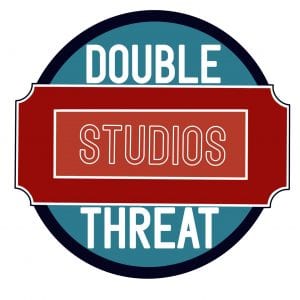 The logo for the new Double Threat Studios.

They first met doing 2018’s “Shrek” at Quad City Music Guild (when Warren played Fiona and DeLacy was choreographer), and collaborated on Spotlight’s “Matilda” in summer 2019. Among the 18 shows DeLacy was to choreograph in 2020, she and Warren were to partner on “Tarzan,” “Evita,” “The Addams Family” and “The Sound of Music” at the Spotlight, which all were postponed due to Covid.

The main reason to get their own location was limited space at the Spotlight, 1800 7th Ave., Moline. DeLacy’s current studio was 13.5 feet by 8 feet.

“Very quickly, it became clear that I had outgrown the space,” she said Monday. “I also anticipated having up to 12 students total, and now I’m up to 35, so it’s presented challenges as to what I can teach in there; how many people I can teach. It’s also a height barrier.”

“It was clear early on, while I liked having that space, it wasn’t going to be a long-term solution,” DeLacy said. The Duck Creek Plaza location formerly housed a Hallmark store, and there are two separate rooms so they can easily offer tap and voice lessons at the same time. 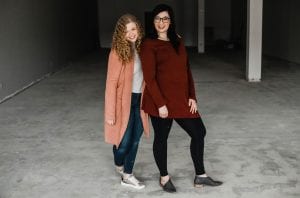 Warren and DeLacy in 3,500-square-foot studio space at Duck Creek Plaza, Bettendorf, to open in January.

“The plaza has a lot of empty space, so they were very willing to work with us to get a good deal,” Warren said. “I think, not to say, starting a business during a pandemic, but it did sort of aid us. They were like, we want to fill a space.”

The number of students they can have in each theater class will depend on what the Covid restrictions are in early January.

“As of right how, we said we’re planning on capping them at 30 or 35,” Warren said. “Our space is luckily pretty big, so we can space out and have masks and other precautions. That’s currently the cap, but we’ll see how registration goes. We’ll see where the numbers are sitting, but as far as our individual studio students, nothing will change for them.”

“Just a bigger space,” DeLacy said, noting she can’t estimate what the total renovation costs will be, but are less than they planned.

They expect to have about 12 weeks of rehearsals for their first musicals (each of the two groups will do their own), with performances in early May. They will announce the shows next Monday, Dec. 7, for the spring and summer.

“We’re also really excited to provide that much rehearsal time, in a 12-week period,” DeLacy said.

They also are still waiting to announce the venue for performances, which is dependent on Covid restrictions for audience capacity. “It’s a waiting game at this point, but we do have several options in mind, should this initial option fall through,” DeLacy said.

Warren and DeLacy are committed to the same Spotlight shows they agreed to music direct and choreograph in 2020, which they hope to do in 2021.

“I don’t even think we know at this point what their 2021 schedule is,” Warren said. “That’s the unfortunate bit. But Steph and I are still 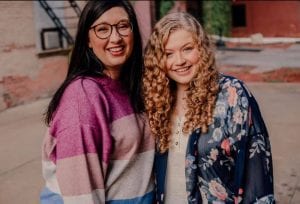 Steph DeLacy, left, is a choreographer and dance teacher, and Megan Warren is a music director and vocal coach.

doing their mainstage stuff, and just transferring this piece over.”

Warren is passionate about providing musical theater options to an age group that doesn’t get as many opportunities.

“I feel like in the Quad-Cities, the major age group that is underserved are the adolescents, the 12 to 15, 16-year-olds,” she said. “There are so many children’s programs, but all of the programming tends to cut off at 7th or 8th grade, or kids that want to go out for community theater productions, there aren’t many roles – there are the little, little roles, and the adult or teenage roles.

“So, at least, I want to make a community theater opportunity for that age group,” she said. “They can put on a full production; they get the fast-paced instruction; they get essentially a mainstage production feel at an appropriate level, in an environment that is still learning.”

When DeLacy was at the Family Museum teaching dance (for eight years), her main students were age 8 to 18, which felt like a natural grouping. And Warren has experience teaching middle schoolers, since she was choir director at Geneseo Middle School for three years.

Any student who registers will be cast in their shows, after auditions to figure out where they fit, Warren said.

“Our goal is to create theater lovers – to create people as adults who have the skills and ability, not to do it professionally, but just to enjoy it,” she said. “They can do shows at the Spotlight, Quad City Music Guild, Playcrafters, and those places.”

“Our hope is that every person will have a place to shine,” Warren said.

They also plan to record the podcast in the new studio space. On the podcast page of their website, doublethreatstudios.com, it says the podcast is aimed towards older students and adults, and listener discretion is advised, as “language and sexual references are used frequently when discussing the content and themes of musicals.”

You can sign up for emails to receive studio news, updates, class information, and special promotions only for email subscribers, at doublethreatstudios.com/email-list-sign-up. There are also Double Threat shirts for sale, available at www.bonfire.com/store/double-threat-studios/.

Of the women’s seemingly endless number of talents, DeLacy called her pal “infinity threat.” On their Facebook page, Warren wrote: “Steph is the most giving friend and partner – and she always makes me want to be a better version of myself.” That’s a partnership that will outlast any pandemic.

Jonathan Turner
Jonathan Turner has been covering the Quad-Cities arts scene for 25 years, first as a reporter with the Dispatch and Rock Island Argus, and then as a reporter with the Quad City Times. Jonathan is also an accomplished actor and musician who has been seen frequently on local theater stages, including the Bucktown Revue and Black Box Theatre.
See More Articles From Jonathan Turner
Advertisement
Tagged: double threatdouble threat the podcastMegan WarrenMusic GuildQuad City Music GuildQuadCities theaterspitfire grillSpotlight TheaterSteph DeLacy