Dancing With The Stars Coming To Davenport’s Adler Theater

America’s favorite dance show is back on tour this winter to celebrate its 30th Season with “Dancing with the Stars – Live Tour 2022.” Launching January 7 in Richmond, VA, this year’s all-new production will feature fan-favorite professional dancers thrilling audiences with 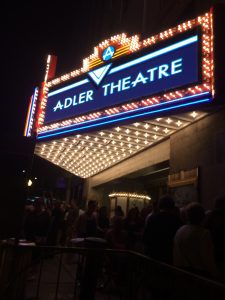 all of the breathtaking dance styles seen on ABC’s hit show Dancing with the Stars. The show continues its legacy of performing showstopping routines from the TV show alongside new numbers choreographed specifically for the live show, ranging from time-honored dances like the Quickstep and Foxtrot to sizzling Latin styles like the Cha Cha, Salsa, and Tango. In this year’s state-of-the-art production, audiences will have the opportunity to experience the excitement, glitz and glamour they see in the ballroom every Monday night live in their hometowns.

The tour delivers a spectacular night of pulse-pounding dance performances from world-renowned dancers including Brandon Armstrong, Alan Bersten, Artem Chigvintsev, Sasha Farber, Daniella Karagach, Pasha Pashkov, Gleb Savchenko, Emma Slater, and Britt Stewart with more surprise casting to be announced. Previous Mirrorball Trophy winner Alan Bersten says, “After not being able to tour last year, we’re all so excited to bring the “Dancing with the Stars – Live Tour” back to all of our dedicated fans around the country. I’m especially looking forward to this year’s tour because we also get to celebrate our show’s amazing 30th Season.”

“Dancing with the Stars – Live Tour 2022” is coming to the Adler Theatre on Wednesday, February 2, 2022 at 8:00 p.m. Tickets ($59.50, $69.50 & $89.50) are on sale in person at the Adler Theatre Box Office (136 E 3rd St.) or online at Ticketmaster.com. VIP packages giving fans the chance to purchase Premium Tickets, Pre-Show Cast Q&A passes, Exclusive Merchandise and Photo Opportunities will be available through dwtstour.com.

Sean Leary
Sean Leary is an author, director, artist, musician, producer and entrepreneur who has been writing professionally since debuting at age 11 in the pages of the Comics Buyers Guide. An honors graduate of the University of Southern California masters program, he has written over 50 books including the best-sellers The Arimathean, Every Number is Lucky to Someone and We Are All Characters.
See More Articles From Sean Leary
Advertisement
Tagged: Adler TheaterDancing With The Starsdancing with the stars coming to the adler theaterDavenport