The exhibit – “Paintings Within Paintings” – will be on display May 28th through July 28th. An opening reception with the artist (who recently moved to Tucson, Ariz.) will be held Friday, June 4, from 5:30 to 7:30 p.m.

“Tim Schiffer has been a moving force in the arts here in our area,” says Pat Bereskin, gallery owner, artist and art teacher. “As past director of the Figge, during his tenure, he made great strides to bridge the gaps in exhibiting local and regional artists. While no one knew Tim was moving to Arizona, when we booked his work, it now seems a perfect way to bring him back to allow the Quad-Cities to enjoy this masterful artist once more.

“Tim’s ability to connect still life, symbolism and the work of artists you should know into each and every piece is astonishing,” she says.

Many of Schiffer’s watercolor works combine traditional still life (like fruit, glasses and tableware) with reproductions of other famous paintings, partly for their role in the composition, but also for the stories they add to his art. 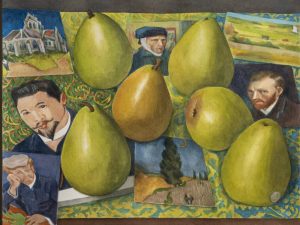 “The tradition of still life, depictions of everyday objects on a tabletop or shelf, goes back thousands of years,” Schiffer says.

“In Dutch painting of the 1600s, objects were chosen to convey a message: fading flowers, skulls and mirrors alluded to the fleeting nature of life, while opulent silver, glassware and extravagant foods spoke of wealth and fertility,” he says. “In the 20th century, Picasso, Braque and other modernists used still life to experiment with new ways of depicting light, space and volume, and to bridge the gap between realism and abstraction.”

“I like the challenge of depicting a variety of objects, shiny and transparent surfaces, patterns and textures. I experiment with angles of vision and effects of lighting in a controlled situation,” Schiffer says. 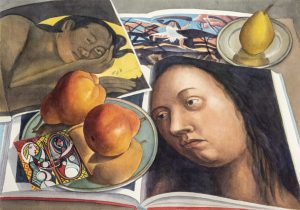 “When I started including postcards and reproductions of artworks, it added another layer of space, scale and subject matter to the paintings. The famous artworks are objects in my work, arranged at different angles just like the plates and bowls, but carrying their own subject matter and formal approach. I choose them intuitively, without looking for a specific meaning—often just because I want to paint them.

“In the tradition of still life, I want my paintings to be a celebration of life, an invitation to look at the known world with fresh eyes,” he says.

Schiffer has incorporated other artworks in his paintings for about four years.

“You know I’ve always collected postcards from museums since I was a little kid and I just was doing these paintings of dry leaves, which was kind of interesting and one day, I just did one of leaves sitting on top of a postcard and I really liked, it was like it opened a whole ‘nother dimension in the painting,” he said Wednesday. “So then I’ve just been kind of playing with that ever since.”

It can be intimidating for him to duplicate famous paintings (like Van Gogh or Seurat) as postcards.

“It’s challenging. It’s kind of fun, but it’s definitely challenging,” Schiffer said. “I really have to spend quite a bit of time messing around with them until I find a combination that works, you know, and that’s the most frustrating part is just trying to figure out the idea of the 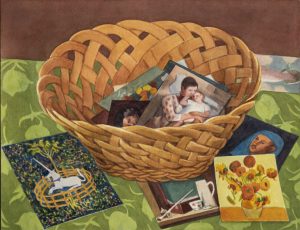 “It’s just very intuitive and so sometimes it takes a week,” he said. “I’ll spend like three or four hours moving stuff around on the tabletop and accomplish nothing. And so, then that if I don’t really know what I want to do, if I don’t have a setup that I really like and I know I won’t have the interest to complete the painting? You know what I mean? So there’s a lot, I do a lot of drawings before I start the painting.”

Schiffer’s paintings in the new exhibit were done between January 2020 and March 2021. He previously showed 20 of his works in December 2019 at Quad City Arts, Rock Island, which Bereskin saw and admired.

“I met Pat when I first came to the Quad-Cities and I really admire her for, she’s got unbelievable energy and the classes she does now, it’s very ambitious what she’s doing. And so she had mentioned it, when I had the show at Quad City Arts, she mentioned maybe doing a show and then she contacted me.” 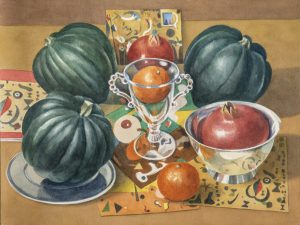 Schiffer and his wife (who have three adult daughters) went on vacation to Tucson for a month in January 2021, and decided to move there. Since the end of April, they’ve been renting a place while their new home is being built, and Schiffer will come to the opening reception on June 4. His new paintings also were inspired by a Figge-sponsored trip to the Netherlands in 2017.

Being in lockdown at home last year also was conducive to getting more painting done.

“Part of the paintings that I’ve done, the paintings in them are kind of dependent on the books and postcards that I have,” Schiffer said. “And I’m always kind of looking for new books but actually some of the Van Eyck paintings are all from a book that I bought on a Figge trip to the Netherlands and that book has been like a gold mine because it has really great images of Van Eyck paintings.”

From Wyoming to New England

A 66-year-old native of northern Wyoming (where he was raised on a ranch), Schiffer’s interest in art was encouraged by his mother, who studied at the Art Students League in New York, and introduced him to watercolors. He attended Phillips Exeter Academy in New 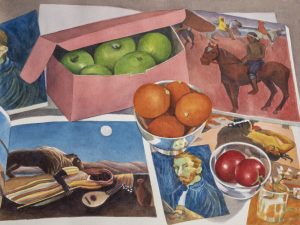 Hampshire, and studied for a year in Rennes, France.

Schiffer earned his BA in art from Yale, and attended the Yale Summer School of Music and Art in Norfolk, Conn, which he called one of the most beautiful places in the world. He earned his MFA in painting from the University of California, Santa Barbara, where for eight years he was a lecturer in art and gallery director at the College of Creative Studies, an independent undergraduate program within the university.

Schiffer has served as a grant panelist for the National Endowment for the Arts; a board member for both

the Downtown Davenport Partnership and Davenport Rotary Club, and was an instructor for the Western Illinois University Museum Studies Program.

Since the end of April, he and his wife have been renting a place while their new home is being built, and Schiffer will come to the opening reception in Bettendorf on June 4.

Bereskin (a veteran Quad-Cities artist and teacher) is impressed with Schiffer’s work in more ways than one.

“As an artist, I respect his use of the medium, watercolor, and his homage to other gifted artists,” she says. “As an art teacher, I see his original thoughts as a way to teach my students memorable ways to correlate the colors and images into their memories — thus creating a way to retain and recall that new piece of artistic knowledge.

“This exhibition will become a unit in the curriculum of our school next year,” she says. “We are very proud to have Tim’s work in our permanent collection of artists at Bereskin Gallery and represent him here in the Midwest.”

For more information, visit www.timschiffer.com. For more on the Bereskin gallery, visit www.bereskinartgallery.com.

Jonathan Turner
Jonathan Turner has been covering the Quad-Cities arts scene for 25 years, first as a reporter with the Dispatch and Rock Island Argus, and then as a reporter with the Quad City Times. Jonathan is also an accomplished actor and musician who has been seen frequently on local theater stages, including the Bucktown Revue and Black Box Theatre.
See More Articles From Jonathan Turner
Tagged: bereskin gallerybereskin gallery and art academyFigge Art Museumquadcities artistsTim Schiffer