“65,” the new science-fiction thriller from former Bettendorf filmmakers Scott Beck and Bryan Woods (“A Quiet Place”) will be soundtracked 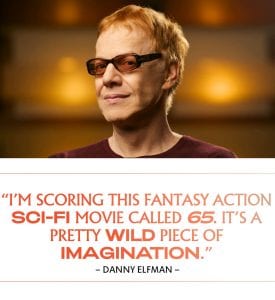 by a familiar name — Danny Elfman.

The Oscar-nominated Elfman has been a legendary figure over the past several decades, doing the soundtracks for massive hits including Batman, Edward Scissorhands, Charlie and the Chocolate Factory, Alice in Wonderland, and Dumbo; Raimi’s Spider-Man, Spider-Man 2, and Oz the Great and Powerful; and Gus Van Sant’s Academy Award-nominated films Good Will Hunting and Milk. 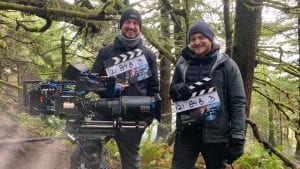 Elfman, who first gained fame as the front man for the band Oingo Boingo, wrote music for all of the Men in Black and Fifty Shades of Grey franchise films, the songs and score for the Burton-produced animated musical The Nightmare Before Christmas, and the themes for the popular television series Desperate Housewives and The Simpsons.

On their Facebook page, Beck and Woods wrote the following:

“Passing out from joy as we announce

For more information on the film, see here.

Sean Leary
Sean Leary is an author, director, artist, musician, producer and entrepreneur who has been writing professionally since debuting at age 11 in the pages of the Comics Buyers Guide. An honors graduate of the University of Southern California masters program, he has written over 50 books including the best-sellers The Arimathean, Every Number is Lucky to Someone and We Are All Characters.
See More Articles From Sean Leary
Tagged: 6565 movieBryan Woodsdanny elfmanquadcities filmmakersquiet placeScott Beck