More than 20 years after his untimely death, the classic music of John Denver lives on in “A Rocky Mountain High Experience,” coming to the Adler Theatre on Friday, April 16, 2021 at 8 p.m.

Rick Schuler will perform a John Denver tribute show at the Adler Theatre on April 16, 2021.

Ever since singer, songwriter, and adventurer Rick Schuler wore his first pair of round glasses at age 13, the murmurs began. It was undeniable, he looked like John Denver, an artist he’d never heard of until that moment, according to the Los Angeles singer/songwriter’s bio.

It was during an era when the music of John Denver permeated the airwaves with sweetness and sunshine, a salve to the wounded and weary soldiers returning home unloved from an unpopular war.

“John Denver was the biggest star in the world, and I didn’t have any idea who he was,” says Schuler, who quickly discovered that Denver was the guy on the radio whose music he loved. “I was a very shy kid, and John and I kind of became bonded. I taught myself to play guitar and it grew from there.”

Nearly four decades later, Schuler has emerged as the leading performer of John Denver’s music. His “Rocky Mountain High Experience” is just that — a true, intimate experience. Schuler performs in front of thousands of Denver fans each year with favorite hits such as “Sunshine on My Shoulders,” “Take Me Home Country Roads,” “You Fill Up My Senses,” and “Thank God I’m a Country Boy.”

Schuler not only sings, sounds, and looks like Denver, he shares his humanitarian spirit and incorporates his global works into the show, his bio says. He performs in front of thousands of Denver fans at such wide-ranging venues as performing art centers, theatres, and outdoor festival stages, and has been featured on nationally syndicated television and radio shows.

“John was a romantic, an anti-materialist in a materialist world, who sang from his heart while baring his soul,” Schuler says. “I share that 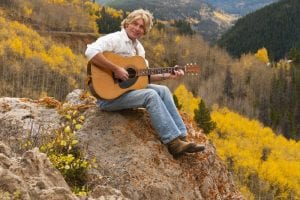 Schuler has been recognized for his uncanny resemblance (vocally and visually) to John Denver, who died at 53 in 1997 plane crash.

with him, and that connects me with people.”

In addition, he says, history is also the great connector.

“C.S. Lewis said it best when he stated one should read old books to let the breezes of the centuries blow through your mind,” Schuler says. “That’s what the Dead Sea Scrolls are all about. And that’s what John’s music and art taps into, that greater consciousness that is basically timeless.”

In addition to performing Denver’s hits, Schuler writes and performs hits of his own, including “Rainmaker.” Among its lyrics is a Schuler maxim: “Live to inspire, and to be inspired…”

He has four albums on iTunes and among his latest gems is “Golden Days of Aspen Glow,” a song he wrote to pay tribute to John Denver and Dan Fogelberg, the footsteps that he’s walking in.

Denver (a pilot with over 2,700 hours of flying experience) died at age 53 on Oct. 12, 1997 after his single-occupant plane crashed into Monterey Bay near Pacific Grove, California,

Tickets to the Adler’s socially-distanced event will be sold in pods. Guests must purchase all seats within a selected pod. Face coverings are required unless you are actively eating or drinking. Learn more about how the Adler works to create a safe environment at AdlerTheatre.com.

Jonathan Turner
Jonathan Turner has been covering the Quad-Cities arts scene for 25 years, first as a reporter with the Dispatch and Rock Island Argus, and then as a reporter with the Quad City Times. Jonathan is also an accomplished actor and musician who has been seen frequently on local theater stages, including the Bucktown Revue and Black Box Theatre.
See More Articles From Jonathan Turner
Tagged: Adler TheaterDavenportJohn Denverjohn denver experiencequadcities concertsrick schulerRiverCenter