First Jambrella on Feb. 26 Raised $7,000 for Quad-Cities Musicians and Bars in Need

The first massive Jambrella music festival – aimed to give back to local musicians and bars – was a massive success Feb. 26 at The Mound in 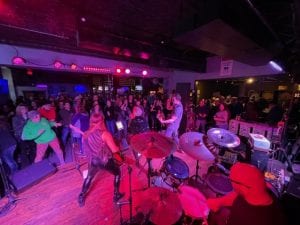 The first Jambrella fundraiser brought in over $7,000 in donations.

Artists who performed (from 6 p.m. to 1 a.m.) included Molly Durnin, Far Out 283, Angela Meyer, Fair Warning, 3 On The Tree, The Channel Cats, Project X, and Michael Moncada and Whiskey High.

Twenty-nine total musicians participated and six bars that host live music were picked to benefit from the fundraiser. After expenses, divided 34 ways, each will get $151.53 – since one musician who played, Logan Springer, volunteered to donate his cut back. A few friends asked just days before to fill a half-hour slot formed what they called One Time Band.

“These are pretty incredible people,” Michael Moncada, a Q-C musician and primary organizer for the event, said Monday. 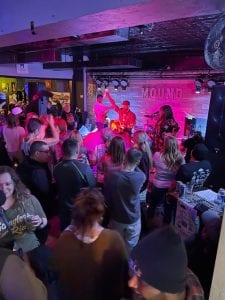 The first Jambrella music festival was held Feb. 26 at The Mound, Village of East Davenport.:

The selected bars and venues to benefit from Jambrella are:

“Everybody came together, it was phenomenal,” Moncada – who started Jambrella Productions to organize and promote the event — said Sunday night. He privately expected raising about $4,500 at most, after sharing the event on Facebook for only 12 days.

“I figured after 12 days, that would be an achievement,” Moncada said. “I didn’t know who would be able to pull people out with the fear of Covid, things like that. People are hungry for music, but I know how much people were worried about that.” 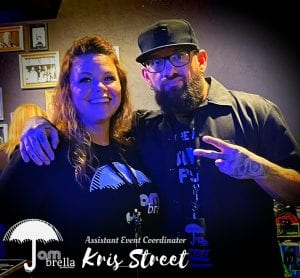 “It was pretty incredible to be opening the tip jar every hour to count the tips, and I’d see 10s and 20s and 5s, and a couple 100s,” he said. The Mound even donated back 10 percent of their sales, after giving a free drink ticket for everyone who donated (the suggested amount was $5 per person).

“There were hundreds and hundreds of people through there over the night,” Moncada said. “It was wall to wall to wall. It was incredible.” 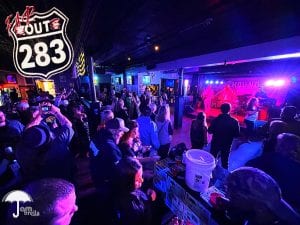 “We couldn’t have asked for a better turnout, for the very first one ever,” he said. “Because it was such short notice, I was worried.”

“The turnout was fantastic,” Alex Axup, bass player for Fair Warning, said Saturday. “The community really came together and supported a good cause. Playing on stage to all of those people that were all there to help out these local bartenders and musicians was a very heartwarming feeling.

“It showed that everyone really cares and understands what others are going through and they want to help,” she added.

“My performance last night at the very first Jambrellla Productions event, I have no words. The energy in that room was unmatched…..I gave it all I got, left it all on the stage. THESE are the moments I live for. This is why I love music.”

For the past 10 years, Durnin has worked as a full-time touring musician, but 2020’s Covid pandemic put a stop to that – as it’s decimated 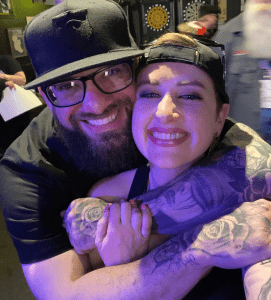 the careers of so many artists nationwide.

“It was the worst year of my life,” the 32-year-old Moliner said the week before Jambrella, noting her gigs were shot for most of the year, 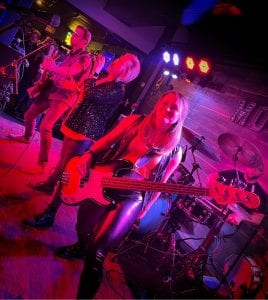 Alex Axup, the bass player for Fair Warning at The Mound.

between mid-March and the fall. “It left me completely confused, hopeless as to what to do in my life. For a lot of us musicians, it’s not just performing, it’s our life. It’s not a job, it’s a lifestyle. It was traumatizing.”

Durnin moved to the Q-C in 2017 from Charleston, S.C., and she’s moving back there by late April, since it’s a busier (and warmer) music destination.

Moncada announced the Jambrella fundraising total at the end of her live gig at Eleven 17 in the Village Sunday night. He also sang with her Sunday after she asked.

“She’s done the same thing for me. That’s the whole point of community,” Moncada said. “A lot of us have forgotten; we have each other to lean on. You don’t have to lose faith and hope so bad that you take your own life. We’re here – lean on us. The one thing we learned during Covid is, we’re all we’ve got.”

At the end the long Friday night show, Durnin surprised Moncada with a founder’s plaque (that says Jambrella Productions, the date and his name), and she said this is just the beginning. “It really is,” he said Sunday. 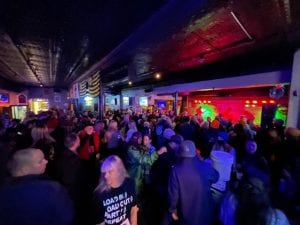 Moncada credited Davenport’s Minuteman Press for stepping up to donate its services quickly, to get posters and raffle tickets made, among other material. “We couldn’t have gotten this done as fast as we did, if they didn’t stop things they were doing,” he said. “They stopped everything and did anything I needed. They’re incredible people.”

The plaque was another Minuteman product, they got done in four days. Jambrella had over 30 sponsors, who donated advertising and items for many gift baskets that were raffled.

At the last song led by Pat Jones, after 1 a.m., in three and a half minutes they made $111 in tips, Moncada said. On Sunday, the owner of Yabba Dabbas smoke shop donated $500.

New life and death add to a big week

Moncada is a 39-year-old Cedar Rapids native who moved around a lot before settling in the Q-C about 18 months ago. He worked 11 years as a professional dog trainer, and has done a lot of promotional work and event coordinating in his career.

While he always loved music, he didn’t start to make it his career until July 2017. By February 2018, Moncada had 75-plus shows to his name at venues in three states, and formed his country rock band Michael Moncada & Whiskey High. 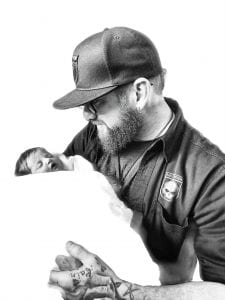 Last week was a really big one for his life in more ways than one, since his first daughter (Laylah Marie) was born to his ex-girlfriend. Moncada has three sons from a previous marriage – ages 18, 16 and 14. “I’ve been waiting for a little girl for a long time,” he said.

“We know how many people are struggling with mental health and I was hoping this would heal some souls,” Moncada said, noting he attended the funeral hours after Jambrella ended on Saturday. “And it did – I had so many people tell me they needed it, who weren’t musicians that night. It was a rollercoaster week.”

Durnin and Moncada sang “Hallelujah” at their friend’s funeral on Saturday morning.

Jambrella is a movement that will keep on keeping on with more fundraisers, Moncada said. “There’s a massive need,” he said. “My plan is to give 80 to 85 percent of the money back each time, for every community we’re in. I’d like to do this around the Midwest, whoever has talent that’s suffering, which is everywhere. 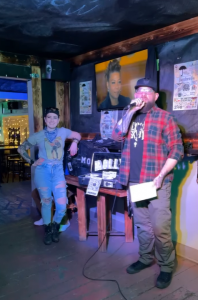 “I feel like there’s a need; we don’t want to get rich,” Moncada said. “We’re used to being poor. If it was about the money, I would have had a whole different philosophy behind this.”

He’s already been approached by other venues (including in South Dakota), to bring Jambrella there. Moncada is planning for another Q-C Jambrella in May or June, at a larger venue, possibly outdoors.

He wasn’t resting on his laurels today, March 1, as Moncada will host an open mic night tonight, from 8 p.m. to 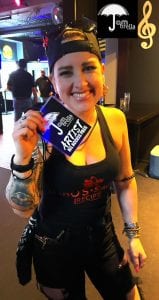 Molly Durnin gets ready to play for Jambrella Feb. 26.

Moncada and Jambrella will be in attendance, holding a raffle for the items below for $1 per ticket. Must attend to win — cash or “CashApp” accepted at  https://cash.app/$jambrella. The raffle items are:

All money raised will go to musicians and sponsored bar staffs of Jambrella. For more information, visit www.facebook.com/jambrellaproductions.