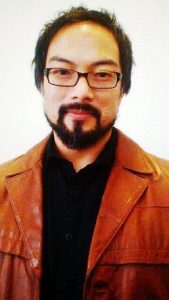 Jason Tanamor has written about sexual identity, prison relations and political humor, so it makes perfect sense that his latest book is for children.

Tanamor’s new and interesting path involves a new stalwart, Superhero Kid, who dons a cape, grabs a teddy bear and flies out into the city with his bedhead to find new adventures in his new novel, “I Heart Superhero Kid.” It’s, as most Tanamor novels are, a little eccentric and off-kilter, and it’s directed towards, as he puts it, kids and middle aged kids.

“The book is an epic story between good and bad, told in rhyming verse involving a hero, his arch enemy, talking cats, and a girl with a crush,” the Rock Island author said.
The book is a father-son venture, illustrated by Tanamor’s son, Ryan McFate, and fans of fantasy and the superhero genre will love this rhythmic poem.

“People are fascinated with superheroes. Me included. Since I was a child, there was this secret obsession with having super powers,” Tanamor said. “I remember being a kid and wrapping a beach towel around my neck, pinning it together with a safety pin, and pretending that I had a cape.”

The critically acclaimed author of “Anonymous” and “Drama Dolls” finally decided to pen his own superhero tale. “‘I Heart Superhero Kid’ is a story that everyone can relate to. Young or old, they’ll resonate with this story because everyone has their own superhero story,” said Tanamor. “Whether it’s battling an illness, finding strength within to manage a stressful situation, or in this case, trying to win over a crush, this story will keep people believing that good and hope will always prevail.” The storyline revolves around Lizzy, a girl obsessed with discovering who Superhero Kid really is. She goes to extreme lengths to find out his true identity, including an idea involving getting mugged so that the hero would have to save her.

While Lizzy is plotting her future, Superhero Kid’s arch enemy, the Evil Man, is plotting his own future — to take over the city. The Evil Man’s plan is to strike during the city’s largest event, a best pizza pie contest where celebrities and politicians convene to partake in delicious pizza slices from area and celebrity chefs. Musicians and comedians perform to entertain, while vendors and games provide activities to those in attendance.

One person is standing in the Evil Man’s way — Superhero Kid. The result is an epic battle of the ages, between good and bad.

“I love superhero stories that have real-world implications,” Tanamor said. “When people can relate to the storyline, it gives readers hope that they can conquer their own complex situations or battles.”

“I Heart Superhero Kid” is available at Amazon (http://www.amazon.com/Heart-Superhero-Kid-superhero-story-ebook/dp/B01D7TOPTM)  in paperback for $15 and digitally for $3.99.

For more info, visit Jason Tanamor on the web at http://www.tanamor.com.

Sean Leary
Sean Leary is an author, director, artist, musician, producer and entrepreneur who has been writing professionally since debuting at age 11 in the pages of the Comics Buyers Guide. An honors graduate of the University of Southern California masters program, he has written over 50 books including the best-sellers The Arimathean, Every Number is Lucky to Someone and We Are All Characters.
SeanLeary.com
See More Articles From Sean
Tagged: children’s booksDingoOnlineI Heart Superhero KidJason Tanamorpoetry booksRyan McFateSean LearyTanamorZoiks!