Home › Articles › Entertainment › Singin’ In The Rain Returning To Theaters Near You!

Singin’ In The Rain Returning To Theaters Near You! 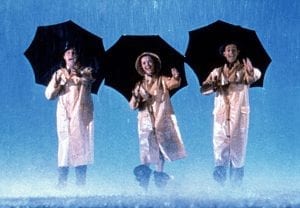 From the studio that brought you the Wizard of Oz comes one of the greatest musicals ever filmed: Singin’ in The Rain. Fathom Events, Turner Classic Movies and Warner Bros. Entertainment are presenting a two-day event of the showing on 1956’s Singin’ in the Rain in celebration of its 65th anniversary. This viewing will be shown in selected cinemas nationwide on Sunday, January 15th and Wednesday, January 18th.  This event will also include exclusive commentary that will give insight into this classic from TCM’s host Ben Mankiewicz.

Singin’ in the Rain stars Gene Kelly, Debbie Reynolds, and Donald O’Connor in a musical set in the roring 20’s during Hollywood’s silent film era. It follows the story of musician Don Lockwood (played by Kelly) as he rises to stardom and falls for a young studio singer, Kathy Selden (played by Reynolds). With the introduction of sound in film, the audience is sure to laugh with the fiascos that take place. This film will be shown in the same aspect ratio as when it was originally released in cinemas. You can view the trailer for Singin’ in the Rain here: https://www.youtube.com/watch?v=36QiuRc_3I8.

One of the theaters where the showing will be taking place at Marcus Sycamore 12 Cinema theater, which is located at 1602 Sycamore Street, Iowa City, Iowa. Tickets are available online at this link: http://marcustheatres.com/movies/tcm-singin-in-the-rain-65th-anniv, and you can visit the facebook event page at the following link: https://www.facebook.com/events/230979703991352/. Prepare to laugh, cry, and dance and sing your way through this musical classic. Cheyanne Lencioni
Cheyanne Lencioni is a student at Augustana College and has been writing stories for 8 years. She is on the college’s Equestrian Team and Fencing Club as well as a member of Augustana’s Collegia Classica Classics Language group and wants to be a published Author after graduation.
See More Articles From Cheyanne Lencioni
Tagged: Fathom EventsSingin’ in the RainTurner Classic Movies