Rhythm City Casino Resort is thrilled to announce Grammy nominated, multi-platinum selling recording artist and one of America’s top comedians, Bill Envall, will be performing in the Event Center! There will be two performances for Bill at Rhythm City on Friday, March 6, 2020. The first performance begins at 6:30 PM and the second performance at 9 PM. Tickets go on sale Friday, October 11, 2019 at 10 AM CST. Prices for this show range from $25 to $60 depending on seat location. Tickets may be purchased online at rhythmcitycasino.com, by calling 844-852-4FUN or in person at The Market gift shop inside Rhythm City Casino. 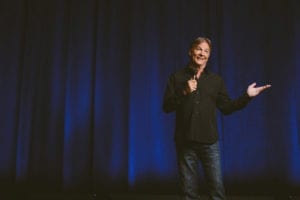 Sean Leary
Sean Leary is an author, director, artist, musician, producer and entrepreneur who has been writing professionally since debuting at age 11 in the pages of the Comics Buyers Guide. An honors graduate of the University of Southern California masters program, he has written over 50 books including the best-sellers The Arimathean, Every Number is Lucky to Someone and We Are All Characters.
See More Articles From Sean Leary
Tagged: Bill EngvallBounty HuntersRhythm City Casino Resort