Home » Spotlight » Event » Horror Week » Dissecting One Of The Best Horror Films of 2019: Jordan Peele’s ‘Us’

Connie Corcoran Wilson October 29th, 2019 Horror Week Share:
One of the most controversial and most talked about horror films of this year or any recent year has been Jordan Peele’s critically-acclaimed “Us,” which is now available on video and streaming services.
I saw “Us” in Austin, at South By Southwest, where it premiered in March, and I’m still letting my thoughts on “Us” and its meaning percolate. Here are 10 possible explanations for plot points in “Us.” WARNING: SPOILERS IF YOU HAVEN’T SEEN THE FILM. 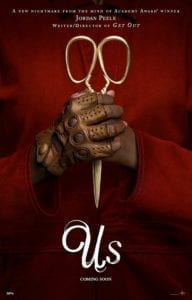 So, see it and figure out what YOU think it all means and let me know.

Connie Corcoran Wilson
Connie (Corcoran) Wilson (www.ConnieCWilson.com) was the Quad City Times film and book critic for 15 years and has continued reviewing film uninterruptedly since 1970. She also publishes books (31 at last count) in a variety of genres (www.quadcitieslearning.com), has taught writing or literature classes at every Quad City college or university as adjunct faculty, was Yahoo's Content Producer of the Year for Politics  and writes on a variety of topics at her own blog, www.WeeklyWilson.com.
See More Articles From Connie Corcoran Wilson
Tagged: Connie Corcoran Wilsonhorror filmsJordan PeeleUs