Yesterday, we counted down the top stories of the year from 30-21, today we get into the next ten, 20-11, and it’s, for the most part, a pretty upbeat mix of stories of local successes, on the individual and group level.

For the criteria on how we picked the stories, check out my column on the countdown. 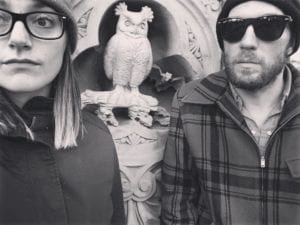 20.) Raccoon Motel Switches To Devon’s Complaint Department, Ending The Moeller Reign Of Downtown Davenport: Over the past few years, Sean Moeller was the ubiquitous king of downtown Davenport, and beyond that to various other Q-Cs spots, bringing in a tremendous slate of buzz bands through the area at the various venues he booked, from Daytrotter to The Rust Belt to Village Theater to Codfish Hollow. But the greatest concentration of those spots were in downtown Davenport, from his original salvo with Daytrotter, to the Raccoon Motel and Stardust and more. For a few years, the downtown was on the rise, and Moeller’s venues were at the forefront. However, for a variety of reasons, they faded in 2019. The Rust Belt in East Moline and Codfish Hollow remain as bastions of the Moeller Nights brand, but unfortunately, downtown Davenport is the poorer for losing the rest, with Daytrotter shut down, Stardust shifting in a different direction and Raccoon Motel moving over to a new identity as Devon’s Complaint Department. 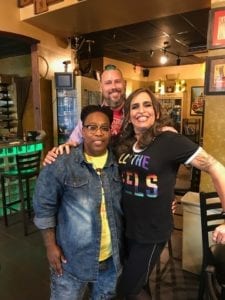 19.) Quad City Pride Week Explodes In Second Year: Many have been the festivals that have expanded quickly only to regret it and recede the following seasons, but Quad City Pride Week, a year after going from a weekend festival to a full week of activities, only became more popular, exploding in scope. We usually don’t include continuing annual festivals in the top stories of the year, since they happen every year, but Pride deserves special mention for the way it’s overcome adversity, overcame a flood this year, and has expanded so quickly with bi-state parades, bar crawls and various activities. The future certainly looks bright. 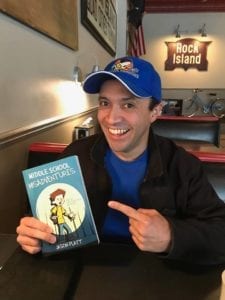 18.) Local writer Jason Platt Releases Middle School Misadventures On Little Brown: Jason Platt has been illustrating his popular Mister and Me comics for more than a decade, and had already indie released two best-selling collections of the adorable and insightful stories of a father and son growing up together, but it was in 2019 that he had a book released on a different level, as New York-based publisher Little Brown put out his “Middle School Misadventures,” which was promptly praised by critics and teachers, picked up by Scholastic and nominated and tabbed for a number of book awards. By the end of the year, Platt had an announcement of a new Middle School Misadventures book due in 2020, and the future is looking bright. It’s a case of great things happening to a great guy who’s been working hard to make them happen.

17.)  Midwest Monster Fest Debuts to Huge Crowds: It’s alive! It’s terrifying! It’s MIDWEST MONSTER FEST! And it hit the scene in a major way this year, striking a vein gushing with local interest in the scary, macabre, creepy and monstrous. The product of the Dr. Frankensteinian mind of creator and producer Jeff O’Neil, the festival featured everything from a tribute to “Texas Chainsaw Massacre” featuring a number of its stars to a costume contest, podcasting, merchandise booths, horror-themed events and more. It hit with such velocity in its debut year at Spotlight Theater in Moline that it’s already moving up to a larger venue, The Rust Belt in East Moline, next year. THAT is pretty damn impressive.  “If you like horror movies as much as I do, this is everything you would want in a festival,” O’Neil said. “There are a lot of fun things to do!” This year’s debut event also coincided with the 45th Anniversary of the classic horror film, Texas Chainsaw Massacre, and featured celebrity guests Ed Neal, John Dugan and Teri McMinn, all of whom appeared in the film. It was a huge success in its debut year, and it’s only looking like it’s going to scare up more fun lurching forward. Keep an eye – or several — out for this one. 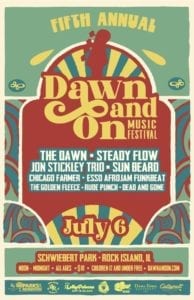 16.) Dawn And On Moves To Schwiebert Park In Fifth Year: So, after I just mentioned with Pride fest that we don’t often include continuing festivals (right before I had to mention Monster Fest, because, in my defense, it’s a newbie and it struck the scene with incredible force, showing great promise), I bring up Dawn And On, in its fifth year. But, it’s well-deserving of a mention here, because what a year it was! It’s always fantastic to see a local festival take off and grow, and few have done so with the steady power of Dawn and On. Sean Ryan and the boys started off with an idea to get a few like-minded area bands together, and after four years in Moline’s North Shore Inn, the fest, at over 2,000 attendance, grew so big it had to move to a larger venue. Enter downtown Rock Island’s gorgeous Schweibert Park, which has been waiting for a slate of annual summer festivals. Dawn and On continued to impress and drew even more in the new digs, thus setting the table not only for its return, but showing that the downtown Rock Island area is ready for prime time in terms of outdoor summer fests. More to come? Looks like a new… wait for it… wait for it… dawn. (C’mon, you knew that pun was coming. Or, should I say, rising…)

15.) Family Museum Earns New Autism-Friendly Designation: Parents with children on the autism spectrum, as well as individuals with other sensory needs, often find it challenging to identify attractions where they feel safe, welcomed and understood. They can find that at Bettendorf’s Family Museum. This year, the museum earned the Certified Autism Center™ (CAC) designation, which is granted by the International Board of Credentialing and Continuing Education Standards (IBCCES) and demonstrates Family Museum’s dedication to providing a supportive environment for guests with autism and other sensory disorders. Staff completed sensory disorder training and a comprehensive exam in order to earn this certification. “The Family Museum is committed to providing a highly trained staff to improve the experience and learning environment for individuals and families affected by autism,” said Kim Kidwell, Family Museum Director. As a leader in healthcare, corporate, and education certification for 20 years, IBCCES recognized the need for more travel and entertainment options for individuals with cognitive disorders and, in response, created training and certification programs specifically for those areas. “Family Museum staff are now better equipped to meet the needs of all guests and we’re proud to work with them on this initiative. We applaud their concerted efforts and recognition of the need for professional certification,” said Myron Pincomb, IBCCES Board Chairman. IBCCES also created AutismTravel.com, a free online resource for parents that lists certified destinations and connects families to other resources and each other. Each destination listed on the site has met Certified Autism Center™ (CAC) requirements. For parents of children with autism and similar needs, this is great news indeed.

14.) NFL Draft visits Rock Island: Believe it or not, Rock Island was one of the 14 inaugural cities of the NFL, and this year, to mark the 100 year celebration of the league, they decided to hold part of the draft proceedings at those inaugural cities. Ergo, Rock Island ended up hosting part of the sixth round here in April, and included a number of other events for kids and families to go along with the event. Will there be a 101-year celebration next year? Maybe, maybe not, but it was cool to see Rock Island’s heritage celebrated in such a way, and possibly see something springboard off of that. Mayor Mike Thoms said at the time, “We could not be more excited about the NFL Draft coming to Rock Island. There’s been a lot of hard work put in to get recognized, and the NFL honoring us with a draft pick for their 100th Anniversary confirms Rock Island’s status in the history of professional football.” 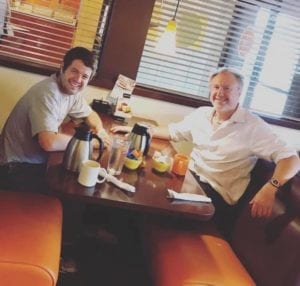 13.) Local actor Justin Marxen stars in nationally-released “Haunt”: One of the most rewarding breakthroughs of the past year or two has been that of Scott Beck and Bryan Woods, the Bettendorf-born-and-raised duo who have been working for close to 20 years on various films, only to finally strike gold with “A Quiet Place.” Along with that success came an offer for their first big-time directorial and screenwriting debut, on a critically-acclaimed thriller called “Haunt.” And who should they tab for the starring role in that movie, but a guy they’d been working with since they were teens two decades ago, who’s still living and working here in the Quad-Cities, a guy who’s been a regular in local films and on area stages named Justin Marxen. Most of Marxen’s role and backstory of the character are being kept under wraps, so as to not spoil the film, which got terrific reviews at various film fests and won a number of awards from horror film magazines and websites, many of which praised the performance of Mr. Marxen, who remains low key and humble through it all. As with Beck and Woods, “overnight successes” are often just a new spark of recognition for people who have been working for years, or decades, and that success is often well-deserved. Such is the case with Marxen, who we’re looking forward to seeing in many more big-screen endeavors in the future.

12.) Paul McCartney sells out the TaxSlayer Center: Much like annual festivals, it’s hard to include big concerts on the list, because the people for whom they have the most impact are those that could afford to see them, especially those who had to take out a second mortgage to afford the rising ticket costs for some big concerts. Plus, there are so many big names that come through the area, that it’s tough to pick just a few to include on any top stories list, and, ultimately, it’s an exercise in subjectivity and music taste of the person compiling the list. But you can’t deny McCartney making his debut at the Moline arena was a huge deal. There arguably aren’t any bigger rock stars alive on the planet right now, with the possible exception of the Rolling Stones. As for lasting resonance, the TaxSlayer has already got a fantastic reputation in the business. At this point, artists are happy to come to play here, so, while having Paul is a feather in the cap, their chapeau was already looking like a peacock on steroids. Fantastic job by the folks at the TaxSlayer to get him, all kudos to them, and from all accounts the show was fantastic. 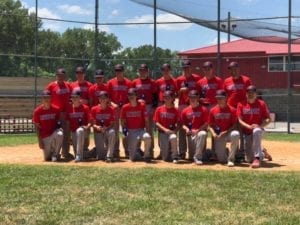 11.) Davenport Babe Ruth wins 15U championship: Davenport Babe Ruth Baseball’s 15 U team hit a towering home run in the state championship in July, winning the title and bringing home the gold to the Quad-Cities! The team, coached by Brandon Jens, defeated Davis County in the finals 9-3. The game featured a six-run-rally in the sixth inning to break the tie and send the boys to the next stage. It was sweet revenge, as Davis County had beaten the same team in the tournament the last two years, both times by a single run. In the semifinals, Davenport knocked out Ottumwa, which was trying to win a state title in three different age divisions over the past three years, by a 4-1 tally. “It’s great to come back here and win like this,” Jens said. “Our league has done really well at the state level, but this particular group of kids had not. I think they were starting to wonder if this would be the crew that couldn’t get it done.”

Coming tomorrow: The top ten stories of the year.