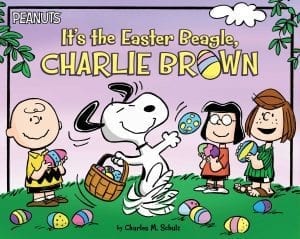 In the 1974 special IT’S THE EASTER BEAGLE, CHARLIE BROWN, the gang is obsessed with the looming specter of Easter and living in existential fear they won’t be buried alive in an avalanche of eggs. Everyone, that is, except Linus who takes a break from obsessing about the Great Pumpkin to obsess about a thing called “the Easter Beagle”. (And Sally calls him on it.) Meanwhile, Marcie, apparently an Easter neophyte, cluelessly lays waste to scores of defenseless eggs.

And as if THAT wasn’t enough, we’ve also got our fourth episode of THE CHARLIE BROWN & SNOOPY SHOW, which aired originally on 10/1/83. All the familiar tropes are hit: Sally’s crazy school reports; Charlie Brown kicking the football; Lucy is bossy and Linus suffers under her regime; Schroeder hates Lucy, but she doesn’t care; Charlie Brown can’t kick the football; Charlie Brown’s baseball team is awful. Nothing really new here, but, hey, it’s Peanuts! We had fun anyway, and even found a few really nice bits.

Our “Peanuts by Schulz” short this month is “My Blanket!”

My thanks also to Henry Pope for the use of his “Linus & Lucy” remix. You can find that and more of his stuff here.

My other show, Atari Bytes. A weekly Atari game show, where we don’t just review the games, but also try to figure out the story going on WITHIN the game. If we don’t know it, we make it up!

Please consider support the show financially on our Patreon page, which is right here.

You can also get cool “Greetings, Fellow Blockheads” t-shirts, mugs and more at our Zazzle.com store AB_Pod_Store.