In episode 73, either all those voices in my head have spilled out onto the podcast, OR this episode is nearly bursting at the seams with INTERVIEWS! Good grief!

We’ve got the hosts of the new podcast “Unpacking Peanuts”: Jimmy Gownley, Michael Cohen and Harold Buchholz. I tried real hard not to let my jealousy over their perfect pod-naming color our conversation.

THEN, for the first time since this pod was in it’s 30’s (episode numbers, that is), author/illustrator Jason Yungbluth returns. He’s got a follow up to his Peanuts-in-a-Dsytopian-Hellscape graphic novel “Weapon Brown” called “Weapon Brown: Aftershock”. And YOU can help make it happen by supporting the Kickstarter.

Exclusive: I’m told MAYBE, just maybe, if the kickstarter meets its stretch goal, I could be immortalized as a (probably gruesomely killed) character in a “Weapon Brown” story. So gather your pennies!

We’ve also got a “Random Strip of the Month”, a review of another “Peanuts by Schulz” and a Snoopy bigger-on-the-inside doghouse of other stuff.

Thanks to Kevin McLeod at Incompetech.com for creative commons use of “Mining by Moonlight” and “Bass Walker”.

Thanks to Sean Courtney for the “This Month in Peanuts History” theme.

Thanks to Henry Pope for the use of his “Linus & Lucy” Remix.

Go to www.carnivalofgleecreations.com for more about IT’S A PODCAST, CHARLIE BROWN, my other show ATARI BYTES and books by ME, like “2nd Duck on the Right & Other Very Short Stories”.

Support the show on patreon.com here. 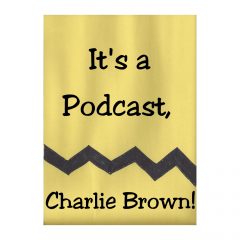 In episode 81, our celebration of Charles Schulz's 100th birthday continues. This time, we're walking through the strip's 25th anniverary book PEANUTS JUBILEE. What was Schulz in his 50s thinking...

In episode 80, Peanuts historian Nat Gertler drops by to discuss the new book he coauthored, "Charles M. Schulz: The Art and Life of the Peanuts Creator in 100 Objects" and many other things. Some of...

NEW EPISODES ON THE 10th AND 20th OF EVERY MONTH. In episode 79, our ongoing celebration of Charles Schulz's approaching 100th birthday continues as we spend some time getting to know Sparky through...