Take a Trip to Paradise at Zeke’s Island Café

Just off the foreboding paths of Harrison Street, in the wild jungles of a college-student populated strip, and in the midst of Duck Creek, marked only by a scruffy, makeshift signpost, lies a slice of the Caribbean right here in the Quad-Cities – Zeke’s Island Café.

The tropical-themed restaurants have grown like tropical forestry since opening up five years ago in their original Kimberly Road location (now closed), before spreading to the two new locales like palm trees in the rainy season. 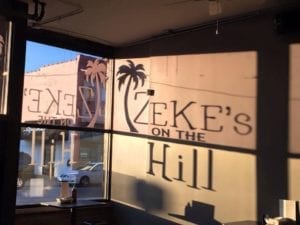 “It’s pretty cool, I look at how things have grown and I’m like, ‘wow,’” said chef Jason Stewart, who co-owns the restaurant with his wife, Jessica. “And the really cool part about it is that we’ve done pretty much no promotion. The success is all because of people who have come here or had our food at fests and told other people. It’s all word-of-mouth. It’s funny because one of the things people always comment on when they come in is the sign. We have great food and a crappy sign. We’ve never had anyone come in and say they haven’t liked the food. I think we can live with that.”

Ironically, Zeke’s was born from the opposite – a series of horrible culinary experiences in a gorgeous island paradise.

“On our honeymoon, my wife and I went to Hawaii and while we had a great time, the food was really disappointing,” Stewart said. “Until we got to the airport. While we were there waiting for our flight, we had pulled pork nachos and they were absolutely delicious. That became the signature item on our menu and it went from there.” 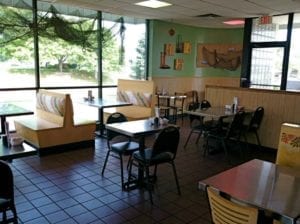 Walk into Zeke’s and you’re immersed in the fun and color of the tropics. Reggae music bounces lightly over the speakers. Tropical plants spike about the windows. Fishnets, tiki torches, seashells, nautical paraphernalia and other coastal tchotchkes are festooned about the walls. And tropical trivia questions perch like macaws over the flower and frond decorated booths.

“My inspirations are taken from all over, and from all the people that come in here,” Stewart said. “I’ve had people from all over the world, all different cultures and different styles of cooking, come in, and they’ll tell me about something, how they make some dish, and we’ll try it out in the kitchen, and come up with something special. People have come in and helped us out in a lot of different ways. We couldn’t have done it without them. If I can, I’d like to give a shout out to the Cruz-Mafnas family. They have been awesome and I can’t thank them enough.”

Stewart, a lifelong Quad-Citian and 1990 graduate of Bettendorf High School, is thinking big for the future as the café grows.